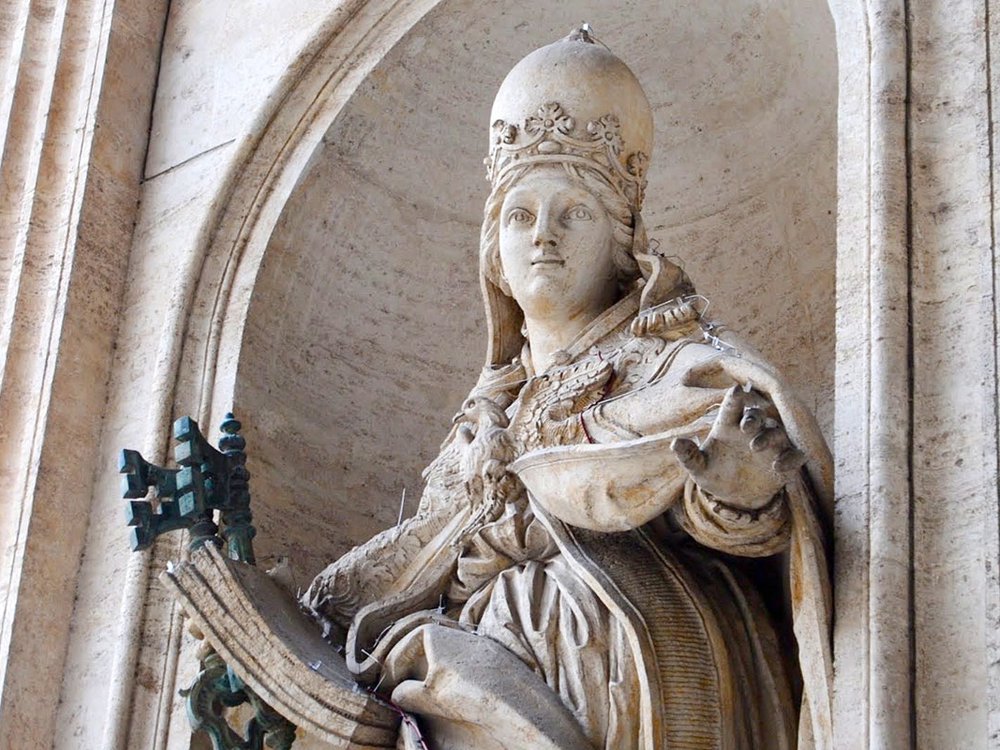 The Catholic Church has a long history of leaders. According to the Annuario Pontificio, or annual papal, the Church has had more than 260 popes have been since St. Peter. By all accounts, every single one of them was male. While the Vatican’s archives span several centuries, most scholars agree that the recorded history of papal leaders is relatively accurate.

However, there’s one story of a “forgotten pope” that challenges every convention we know about the Church. We’re talking about the legend of Pope Joan, the only female pope to exist. The story of Pope Joan is considered by most to be a work of fiction, but that hasn’t stopped some from believing that she was a genuine leader of the Church who was effectively erased from history.

Many retold her story through history, and she appeared in many works of art. At one point, a bust of Pope Joan sat among papal statues in Siena Cathedral. The story of Pope Joan reached its peak during the late Middle Ages and was considered authentic at one point. Later evidence cast doubt before the legend was deemed apocryphal. But even still, the tale of the female pope persists today.

Who Was Pope Joan?

There are many versions of this story, and many inconsistencies exist. The most common retelling involves a woman who went under the moniker of John Anglicus. The woman reportedly came from the German city of Mainz. However, some say that she was of English descent, spending time in Mainz before entering the Church. Either way, she supposedly rose the ranks of the Church during the ninth century while keeping her true identity hidden.

Some accounts say that her birth name was Johannes Angelicus. Others refer to her first name as Johanna. However, the name Joan did not come until the 14th century. Prior to being dubbed “Joan,” the woman in question was called names like Agnes and Gilberta.

How Joan entered the Church and what she did is up for debate. There are slight differences in Joan’s story between retellings. Details aside, Joan disguised her identity under flowing robes holy robes. In the year 855, Johanna was elected into the papacy and took the name of Pope John VIII.

Pope Joan only ruled the Church for a period of about 25 months before her true identity was discovered.

The First Mentions of Pope Joan

Legend says that the Church went above and beyond to bury every shred of evidence that Pope Joan existed. It wasn’t until several centuries later that Joan’s story first came to light. The first recorded mention of the woman pope was by Jean de Mailly in the 13th century. Jean de Mailly was a member of the Dominicans.

In “Chronica Universalis Mettensis,” de Mailly doesn’t mention the female pop by name. Furthermore, he states her rise to the papacy occurred in 1099.

In this version of events, Pope Joan earned a place in the Church with her character and talents alone. In her male disguise, Joan became a curial secretary. She then went to Rome to become a Cardinal before rising to the pontiff.

According to de Mailly, Joan became pregnant. While she was temporarily successful in concealing her pregnancy and true gender, the ruse didn’t last long. She gave birth while mounting a horse. It was a sight that no member of the Church could ignore.

She was bound by her feet to the horse’s tail by Roman justice. It subsequently dragged her for half a league. All the while, the people of Rome stoned her for her betrayal. She died during her punishment and was quickly buried.

The Romans wrote “Petre, Pater Patrum, Papisse Prodito Partum” in the spot where her body lay. That roughly translates from Latin to “Oh Peter, Father of Fathers, Betray the childbearing of the woman Pope.”

After her death, there was supposedly a month-long vacancy before a new Pope was elected. But even still, the Church moved quickly to erase her from the history books. She was a stain on the reputation of the papacy, and Church officials wanted nothing more than to forget that she fooled them.

While Jean de Mailly put Pope Joan back into the limelight, her story didn’t gain prominence until later retellings. French Dominican, Stephen of Bourbon, included the story of Pope Joan in “De Septem Donis Spiritu Sancti.” Also known as “Seven Gifts of the Holy Ghost,” this work was picked up and retold several times during the 13th century.

The third version of “Chronicon Pontificum et Imperatorum” by Martin of Opava came out later in the 13th century. It, too, had Joan’s story. However, several details were different.

The most notable was the timeline. Instead of occurring in the 11th century like Jean de Mailly’s version, this one happened in the 9th century. More specifically, Martin of Opava clarified that the woman pope ruled between Pope Leo IV and Pope Benedict III during the 850s. This version of the tale is most famous because it was the first one to attach a name: John Anglicus or John of Mainz.

Pope Joan was pontiff for precisely two years, seven months, and four days according to Martin of Opava. This retelling also includes some backstory detailing how her ruse came to be. Johanna was allegedly led to Athens by a lover. He was a Benedictine monk who was already on a journey to Athens. He dressed her in men’s clothing to blend in with others and not raise eyebrows as she accompanied him.

During her time in Athens, she studied among men to become proficient in many areas of academia. Her knowledge surpassed many of her male peers, so she went to Rome to further her studies. Still disguised as a man, Joan drew an audience of students who respected her knowledge. Her reputation in Rome grew so much that she was elected into the papacy.

Shortly after her election, she became pregnant by her male companion. But because she was ignorant about the timing, she was unaware of when the baby would come. Unfortunately, she gave birth during a papal procession from Saint Peter’s Basilica to the Lateran.

Martin of Opava says that she died during childbirth. He even provides a precise location. His retelling says that the birth occurred on the street called Via Sacra, or “The Sacred Way.” It was between the Colosseum and St. Clement’s Church. After her death, officials buried her at the same spot. That earned the path the nickname of “Shunned Street.”

This version of events gained significant popularity during the 13th century. It was retold many times by friars and even appeared in manuscripts of “Chronicon Pontificum et Imperatorum.” What gave this version credence was the alleged childbirth and death location. The street was a real place, and future papal processions reportedly avoided the street because of the disgrace. That caused rumors to swirl, making the legend of Pope Joan a fact of truth for many during the Middle Ages.

Interestingly, one version of “Chronicon Pontificum et Imperatorum” gave Pope Joan a different fate. Instead of dying during childbirth, she survived. Of course, she was confined and deposed. The forsaken female pope had to endure years of penance for her trickery. However, the child she gave birth to during that fateful procession grew up to be Bishop of Ostia. After Joan’s death, the Bishop ordered the body interred in his cathedral.

From the 13th century to the 15th century, the story of Pope Joan was regarded as fact. Johanna was used as a moral anecdote in Dominican preaching. At the behest of Pope Sixtus IV, Bartolomeo Platina put the story in the Vatican library.

During the late Middle Ages and Renaissance, legends of the female pope continued to get attention. She was mentioned by Giovanni Boccaccio, the German poet Jans der Enikel, and even the Czech theologist Jan Hus while he stood trial.

The story was also considered true by the Council of Constance in 1415. A carving of her bust was included along with an installation of past pontiffs at Siena Cathedral, too.

Ultimately, she became a medieval legend and an example of moral impurity. Her unfavourable legacy lasted well into the 16th and 17th centuries.

Reexaminations of the Legend

Questions of authenticity began to arise in the latter half of the 16th century. One of the first to try to deconstruct the legend was Florimond de Raemond, a French jurist. The more he analyzed texts and historical recounts, the more the story fell apart.

At the start of the 17th century, Pope Clement VIII outright declared the story untrue. With that declaration, belief in Pope Joan started to wane. The art depicting Joan carved for the series of papal busts at Siena Cathedral was destroyed.

During the Reformation, many historians and scholars criticized the tale after finding several discrepancies across recorded history. For example, the timing between Pope Leo IV and Pope Benedict III would not allow for the events to occur as stated.

Many Protestant historians used the story of Pope Joan in their anti-Catholic writings. The legend became a source of controversy and was frequently used for attacks across faiths.

Some theorize that Pope Joan’s story came out of rumours involving Pope John XII, who had many mistresses. One notable mistress had the name Joan and reportedly influenced his decision-making during his time on the papal throne.

Today, the general consensus is that Pope Joan did not exist. The real Pope John VIII ruled between 872 and 882. However, a lack of reliable records during the Dark Ages led to some confusion that might have forged the path for the story to spiral. The same applies to the confusing numbering system of all Popes with the John moniker.

There’s no evidence to support the existence of Pope Joan. In fact, the timing provided by Martinus Polonus disproves the accounts of the female pope. Pope Benedict III was elected almost immediately after the death of Pope Leo IV. However, the setup of the Antipope led to a delay in consecration.

Another point that many scholars make is that no enemies of the papacy during the ninth century mention a female pope. At the time, Photios I of Constantinople was deposed by Pope Nicholas I. He wrote negatively of the papacy throughout his life. However, he never mentioned Pope Joan, which would have been a major controversy at the time. While he did mention Popes Leo and Benedict, Joan did not appear in his writings at all.

Interestingly enough, relatively recent discoveries are putting the legend of Pope Joan back into the spotlight. In 2018, an archeologist from Flinders University published evidence that reportedly supports the existence of Pope Joan. He found that medieval coins had two different papal monograms attributed to Pope John VIII.

The first is dated between 856 and 858. Meanwhile, the others are dated after 875. The archeologist believes that the earlier monograms belong to Pope Joan.

Whether or not Pope Joan truly existed is still in question. But one thing we do know is that her tale is fascinating. It’s a scandalous story that many artists used as inspiration for their own works.

The famed female pope even inspired movies and is referenced in video games! While her story didn’t end well, Pope Joan is often seen as a symbol of feminism during a time when women were less-than. Her efforts to climb the Church hierarchy and become a leader inspires modern movements even today.

This medieval legend is certainly one of intrigue. It’s unlikely that Pope Joan is a long-lost secret in the Church. While most historians dismiss Pope Joan as nothing more than a myth, her story is one that stood the test of time. Centuries after its creation, the tale of the forgotten popess is one that we continue to tell.