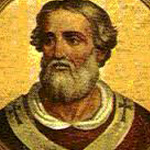 Pope Adrian I was the 95th pope and the first man to choose the name Adrian upon his election. He was Roman and served for more than 23 years, which was significantly longer than his predecessors. This article will talk more about Pope Adrian I and his life before becoming a religious leader.

As with many popes from ancient times, historians do not know much about Pope Adrian I’s life before becoming pope. As he was likely a member of a noble family, he would have access to educational opportunities that other men at the time did. Most historians believe that he studied both theology and the classics. He worked as both a clerk and a notary before becoming a regional bishop appointed by Pope Paul I. Adrian would also serve as a cardinal-deacon under Pope Stephen III.

Pope Adrian I had a much easier route to becoming pope than other men did. Pope Stephen III named Adrian as his successor due to his familiarity with the man’s work. King Desiderius of Lombard was fond of Adrian and named him as his top choice for the position. Many of the followers of the Church also approved of his appointment. Adrian I became pope on February 1, 772 and quickly became one of the more popular popes.

The close relationship between King Desiderius and Adrian I led to the pope looking out for the citizens of Lombard. Upon taking on the position, he quickly released the man and women imprisoned for following the king and those exiled to other nations. Pope Adrian would also form a close relationship with Charlemagne. He turned to Charlemagne for help fighting Desiderius who not only opposed the pope but also wanted to take control of Italy. Charlemagne stopped Desiderius and then spent the Easter holiday with the pope. Adrian would also help Charlemagne recover from the deaths of both his wife and mother in the same year. Feuds between Charlemagne and the Franks were an ongoing issue at the time, but Pope Adrian I sided with Charlemagne and even dated official records based on the dates of the man’s reign. He would pass away peacefully on Christmas Day 795.

Quick Facts About Pope Adrian I

*Pope Adrian I was born in Rome in 700, which was then part of the Byzantine Empire.
*Though historians do not know his name before becoming pope, they believe he was a member of a noble family.
*He died on Christmas Day, December 25 in 795 at the age of 95.
*No records make note of his cause of death.
*The papacy of Pope Adrian I began on February 1, 772.
*His papacy ended on December 25, 795.
*Leo III would become the next pope following Pope Adrian I’s death.

Interesting Facts About Pope Adrian I

*Pope Adrian I reigned for 23 years and 328 days, which would become a record that stood for more than the next century. Only three popes would serve the Church for longer.
*The basilica in the Vatican features an epitaph that Charlemagne wrote in which he called Adrian father. This epitaph is still visible today for visitors.
*Adrian had a deep interest in history and spent time and money to restore some of the historic aqueducts in Rome. He also helped restore some of the churches in Santa Maria in Cosmedin.
*Pepin, the father of Charlemagne, granted large tracts of land to Adrian I, which he maintained and managed while serving as pope.
*Though the Church already granted popes temporal authority in certain situations, Adrian would make this official when he signed the Donation of Charlemagne. This act allowed popes to give authority to others when they needed help.