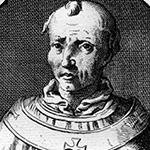 Pope Adrian II was the 106th pope and the second with the name Adrian. He served only five years and passed away on the same date at which he became pope. This article will offer some facts about his life and papacy.

One of the only popes born into a noble family, Adrian II was born in Rome and grew up in Italy. Two of his family members served as pope. Though the Church chose Adrian II twice before, he turned down the vocation in favor of remaining with his family. He married a woman during his younger years called Stephania. The two lived together happily for many years and even had a daughter.

Adrian II was one of the oldest men ever called to serve as pope up through that point. He was already in his seventies and still living with his wife and daughter when he accepted the position. Adrian II move to Lateran Palace and brought his family with him. The former Cardinal was a popular choice for some because he had a commitment to charity, but others thought that he was too old for the position and claimed that he didn’t want to be pope.

Louis II had issues with the predecessor of Adrian II and worried about the new pope as he followed the practices and had the same beliefs as the last. He ordered Arsenius to keep a close watch on the man. Arsenius was a bishop in Orte at the time and worked closely with Anastasius, his nephew. Eleutherius, the son of Arsenius developed an attraction to Adrian’s daughter and would force the young woman to marry him at some point. He then attacked Lateran Palace in 868 and kidnap the pope’s wife and daughter, both of whom he would murder.

Pope Adrian II was the first pope successful in bringing together the east and west. This created 10 different groups that he oversaw at the time. When he passed away in the winter of 872, he became known for his work with the Slavic countries and territories, including approval of the missionary work that some of the residents of those countries did. John VIII became the new pope just days after his death.