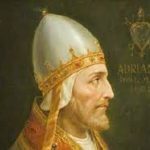 Pope Adrian IV was the 169th pope and the fourth man to choose the name Adrian upon his election. He was the only pope born in the United Kingdom and is one of the most controversial popes too. This article will look at the controversy and the life of Pope Adrian IV.

Nicholas Breakspear was born in 1100 to a man named Robert. After Robert became a monk, Nicholas decided to follow suit but had problems finding a monastery to take him. He moved to Paris and joined the St. Rufus Monastery where he quickly gained a reputation as a strict and serious man. Named abbot sometime between 1137 and 1145, Nicholas would later serve as the Cardinal Bishop of Albano upon the appointment of Pope Eugene III. He also briefly worked as a papal legate.

After Pope Anastasius IV passed in 1154, Nicholas was the unanimous choice for the new pope. He took the position on December 3 and quickly announced plans to go after an anti-papal group in Rome led by Arnold of Brescia. When problems between that group and the Church led to the death of a cardinal, Adrian IV ordered all Churches in the city to close. That was just one of the controversies he faced as pope.

Pope Adrian IV saw other controversies surrounding his time as pope. He oversaw battles relating to the Byzantine Empire and made it clear that he wanted to align with its leaders. Though the pope crowned Frederick I as the Holy Roman Emperor, the two would later feud after Adrian sent a letter that outlined what the ruler could and could not due. Frederick refused to bow to the pope and felt the pope had no control over him. The argument between the two continued until Adrian’s death.

*Pope Adrian IV was born in 1100 in Abbots Langley, which was part of Hartfordshire in the Kingdom of England.
*His birth name was Nicholas Breakspear, though some records spell this as Breakspeare.
*He passed away on September 1, 1159.
*There are two different theories regarding the death of Pope Adrian IV. Some believe that he died after choking on a fly that flew into his wineglass. Historians today believe that he died of quinsy, which is a type of tonsil infection.
*The papacy of Pope Adrian IV began on December 4, 1154.
*He served as pope until his death in September of 1159.
*Alexander III succeeded Adrian IV as the pope.

*Pope Adrian IV granted King Henry II permission to invade and attack Ireland. The papal bull that he issued led to a bloody war. Historians today believe that Henry II would go through with his plans no matter what the pope said and that Adrian IV simply wanted to be on the winning side.
*Adrian IV remains the only English pope, which some think explains his reasons for siding with King Henry II.
*Bedmond is a small village in England that sits on the land where Abbots Langley once stood. The village has several streets named in honor of the pope and a plaque that marks his birthplace.
*Both St. Albans and Uxbridge have schools named after the pope: Nicholas Breakspear Catholic School and Breakspear Primary School.
*Though he named Alexander III as his successor, problems within the Church led to another man selected at the same time. Alexander III would travel to a different country and remain there until he could take the position.
*Cardinal Boso wrote the definitive biography of Pope Adrian IV, which is available in an addition to Liber Pontificalis.