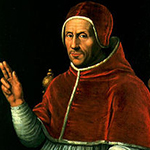 Pope Adrian VI was the 218th pope of the Catholic Church and the sixth man to choose the name, Adrian. He was pope for a total of 613 days and is the only Dutch pope in the history of the Church. This article looks at Adrian and his life both before and after becoming pope.

Known by the name Adriaan, the man who would later become pope was born in Utrecht, which was then part of the Holy Roman Empire. His parents were Florens and Geertruid who already had three sons. His father worked as a carpenter, but the family lived with his paternal grandfather. Adrian struggled in his early years due to the untimely death of his father when the future pope was only 10. To prepare for the future, Adrian studied at the Latin School and in the Roman Catholic community called the Brethren of Common Life.

The Duchess of Burgundy, Margret of York, granted Adrian a scholarship, which helped him attend the University of Leuven. Though he accepted a position as a faculty member for the university in 1488, he became a priest just two years later. Adrian continued working for the university after obtaining a doctorate in theology. He would also spend some time in Spain before becoming Pope Adrian VI.

Election and Time as Pope

Due to issues between the French and Spanish men in charge of the papal election, Adrian became the next pope as a compromise that both sides agreed upon. He became known for the reformation work he did, which included limiting the benefits available to cardinals. Adrian faced problems as other religious movements became more popular, but his work kept the Church strong. He left behind a small portion of land for the University of Leuven, which the university used to build the Pope’s College, a school that opened in 1523.