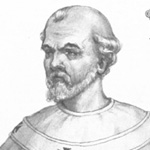 Pope Alexander IV was the 181st Pope of the Roman Catholic Church and the fourth man to select the name Alexander upon his election. He served for more than eight years and oversaw some of the French inquisitions. This article looks at the history of this Italian pope.

Born Rinaldo di Jenne in Jenne, he was born sometime in the late 12th century. Rinaldo belonged to the Segni family on his maternal side and was related to two former popes. Though not much is known about his early life or training, he likely attended school and studied religion and theology. Gregory IX named him a cardinal deacon and sent him to work for the Franciscan Order. He would also work for the Holy Roman Church in Camerlengo. In 1240 or 1242, he joined the College of Cardinals and became its dean. Historians do not know much about his election as pope but have records indicating his work as pope.

Much of what we know about Pope Alexander IV today come from the papal bulls and orders that he issued. He attempted to bring the Eastern Orthodox Church back into the Catholic Church. To do so, he signed an order for the French inquisition. This gave cardinals and other leaders the right to search for heretics and to punish them in various ways. He also had issues relating to Sicily and the rulers of that area. Alexander IV was so upset with that ruler that he threatened to excommunicate him from the Church. Another papal bull issued during his life claimed that he witnessed the stigmata, which helped make Francis of Assisi a Catholic saint.

Near the end of his reign as pope, Alexander IV issued a bull that let cardinals and other leaders find evidence of sorcery or magic. He was also known for his connections to the Provisions of Oxford, which were a series of documents between King Henry III and a group of barons. This would help end the Second Barons’ War and absolve the King of some of the agreements he made in the past. Pope Alexander IV issued this bull just a few days before his death.