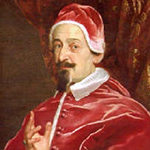 Alexander VII was the 237th person to lead the Catholic Church and the seventh among them to take the papal name of Alexander. This article intends to distinguish him from the many other men to have donned the crown and vestments of his title in the hope that the information will better stand out in the mind of its audience.

Origins and Elevation to Bishop.

He was born to the Chigi banking family and was able to afford a private education that would grant him three doctorates. This man, whose normal name was Fabio Chigi focused on the studies of philosophy, law and theology within the University of Siena. By the year 1627, Fabio had started his apprenticeship as a vice-papal legate of Ferrara, then being elevated to Inquisitor of Malta on the recommendation of two cardinals. He would become a full priest in December of 1634, appointed to the position of Referendarius utriusque signaturae. A month later, he was made Bishop of Nardo. His next job transfer would come on May 13, 1652; he would be transferred to the Bishopric of Imola.

Between his Bishopric work in Nardo and Imola, he also served as Cologne’s nuncio. It is during his time in Cologne that Fabio agreed with Pope Urban VIII’s condemnation of Cornelius Jansen’s “Augustinus.” While it was expected that he would involve himself in the preliminary negotiations of the Peace of Westphalia, Bishop Chigi was among several Catholic delegates who decided to pass on dealing with Protestants, whom the Church deemed to be heretics. This forced the negotiations to happen in two places: Osnabrück and Münster. This involved sending messengers to relay messages between the Catholic and Protestant delegates. Chigi spoke on behalf of the Papacy in his disdain for the Treaty of Westphalia; Pope Innocent X remarked that the Peace was a bad idea in a number of interesting and boisterous ways. It should be noted that this Peace stopped the Thirty Years’ War and maintained equilibrium within European politics for 141 years.

After being recalled to Rome, Cardinal Chigi was made Secretery of State in December of 1651. Two months later, he would be promoted to cardinal. A month after that would see him become Cardinal-Priest of Santa Maria del Popolo.