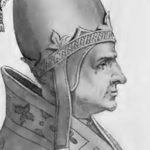 Pope Anastasius IV was an Italian man who served as pope from 1153 to 1154. He was the fourth pope with the name Anastasius and the 168th pope of the Roman Catholic Church. This article will help readers learn more about Pope Anastasius IV.

Before becoming pope, Anastasius was a normal boy known as Corrado. He was born in Rome circa 1073 and was appointed the cardinal deacon of a church in Sabina in December of 1127. That same month, Anastasius received noticed that he was now a cardinal. Benedictus de Suburra, his father, helped him become a clerk for the Church before he became a cardinal deacon. Known as the Dean of the College of Cardinals for many years, his name came up in previous papal elections.

When Pope Honorius II passed away in 1130, many thought that Corrado was the next pope. Honorius II previously named Corrado to the position of cardinal and was close to him. Opposition within the Church led to two names brought up. Anacletus II, also known as Pietro Pierleoni, refused to follow Pope Innocent II and became an antipope. After Pope Innocent II left to live in France because he feared for his life, Anacletus II ruled as his antipope, though Innocent II was still the official pope. Anastasius IV worked as a college dean until the Church finally called him as the next pope.

Anastasius IV developed a strong reputation as a peacemaker during his short time as a pope. Emperor Frederick I had fought with four other popes over his position as an archbishop. By officially recognizing him, the pope helped in this frustrating chapter in history. He also approved the appointment of Saint William of York as the See of York despite some opposition from within the Church. After working as a pope for more than 500 days, he passed away in Rome. The Church immediately named Nicholas Breakspear as the next pope in a fast election that led to him assuming the role the following day under the name of Pope Adrian IV. No other man has chosen the name Anastasius since his death, which makes him the last Pope Anastasius in history.