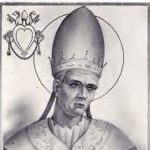 Pope Benedict I was pope from 575 to 579. He was the first pope to use the name Benedict and was the 62nd pope. Those who want to find out more about the life of Pope Benedict I will find information in this article.

Though historians are unsure of his exact date of birth, Pope Benedict I was likely born in 525. Historians estimate that he was 54 at his time of death. His father was Bonifacius who also used the name Bonosus, which is the name that the Greeks in the area called him. Benedict was born in the Eastern Roman Empire in Rome.

Pope John III died near the end of 574, but it took nearly a year before the papal election was held. The Byzantine Emperor of Constantinople at the time claimed that it was his responsibility to approve the next pope. Though the Church put forth several names, it wasn’t until they picked Benedict that the emperor approved. Though he was elected in early 575, it took until June second before he officially became the pope. Most of the issues surrounded his election concerned the Lombards and the war the battles they staged in Italy at the time. The Church had problems communicating with the emperor.

Very little is known about the actions that Pope Benedict I took during his time as pope. He issued the estate called “Massa Veneris” to an Abbot Stephen with St. Mark’s. This was a small territory that was in the eastern part of Italy. Benedict I spent most of his time as pope dealing with the Lombards and their threats. This Germanic group continued moving through Italy during his reign and constantly fought the Church for more land.

Their battles caused a famine that lasted for years and left Roman Catholics in despair. In December of 578, the pope issued formal orders and held a ceremony to appoint 21 new bishops. The same ceremony saw the appointment of three deacons and 15 priests. That was the only bright spot during his reign. He would spend the rest of his days battling with the Lombards and trying to hold the Church together. When he died on July 30, he had been pope for 1,519 days.

Quick Facts About Pope Benedict I

Interesting Facts About Pope Benedict I