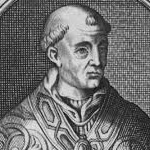 Pope Benedict III was the third pope to use the name Benedict, which he picked in honor of his birth name. He was also the 104th pope of the Roman Catholic Church and served for 921 days. This article will help interested readers learn more about Pope Benedict III.

Born to an unnamed mother and a father named Peter, Benedict I used the name Benedictus during his younger years. He was born in Rome and grew up in the then Papal States. His family had enough money that they could send him to school for formal education. Much of his early life was spent in the Lateran school. Benedict spent more than two years working as a bishop before becoming pope.

The cardinal-priest of San Marco was the first choice for the new pope following the death of St. Leo IV. Leo IV died on July 17, 955. When Church officials announced their decision, they were surprised when the cardinal-priest turned down the position. After suggesting several other names, they settled on Benedict who became pope on September 29 of that same year.

Louis II was the emperor at the time and believed that he had to approve the pope. As he did not approve of Benedict, he instead named Anastasius as the new pope. Anastasius was the son of a bishop and became an antipope. When Louis II imprisoned Benedict, Catholics were so upset that they demanded his release and worked with the emperor to instill Benedict as the pope.

Pope Benedict would later work with King Lothair’s sons after his death as the men fought over who should rule. Noting the problems that the fighting had on the people in the kingdom, he wrote to other leaders and implored them to take action. Some of those letters are still available today. He also helped repair and restore the Schola Anglorum, which suffered severe fire damage before he became pope. Several raids that swept through the region in the 840s also suffered from extreme damage. Benedict used Church funds to repair those buildings and open them back up to followers. After his death, he was buried near the gates of the old St. Peter’s Basilica.