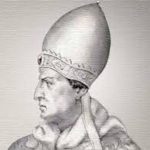 Pope Benedict IV was the fourth pope to use the name Benedict and the 117th pope in history. He served as pontiff for more than 1,200 days.

The man who would become Pope Benedict IV was born in Rome in what was likely 840. His father was a man by the name of Mammalus. Not much else is known about his early life. He likely received his calling early in life and devoted himself to the Church. Pope Formosus appointed him a priest at some point.

The only other act that Pope Benedict IV performed was the crowning of the next Holy Roman Emperor. He gave the position to Louis of Provence. Louis II was the former ruler of Italy and the grandfather of the young man. The crowning made Louis of Provence Louis III. Berengar of Friuli would later become the ruler and send Louis III out of the country. Louis III also had the nickname Louis the Blind.

During his final days, Pope Benedict IV granted privileges to several monasteries and showed his sympathy to some monks and others driven from their homes by invaders. He passed away on July 30, 903, not long after Louis III left Italy. There are rumors that Berengar had something to do with his death. Berengar would remain the King of Italy until 915 and then become the Holy Roman Emperor until his death in 924. Though he was an efficient ruler, his time was plagued with opposition from the Church.