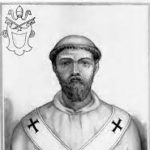 Pope Benedict V was the fifth man named Benedict to serve as pope. He held the position for just 32 days and was the 131st pope. This article goes over his short tenure as pope and other facts about his life.

Born in Rome sometime around 915, Benedict V was the son of John. He was Roman by birth and spent much of his early life in the city. Known for his love of reading and learning, he used the name Benedetto and spent some time at the Theatre of Marcellus. He worked as a public secretary and worked during the elections of both Pope John XII and Pope Leo VIII. Benedict would later become a cardinal deacon.

Leo VIII was elected pope in December of 963 but was not a popular choice. Later named an antipope, he was removed from the position and replaced with Pope John XII in May of 964. When John XII was murdered, the Church was unwilling to give the title to Leo VIII again. Leo VIII had a close relationship with Otto I who was the Holy Roman Emperor. As Romans refused to side with him, Leo VIII fled the city. Though Otto called for Leo VIII to become pope, the Romans instead elected Benedict V and promised that they would keep him safe.

To show his anger, Otto led forces to attack Rome. The destruction they left in their wake led to a famine that affected thousands of people. Benedict vowed his support of the city and swore that he would excommunicate the emperor but did so from a safe and protected location that left his followers unsure of his true intentions. A group of Roman citizens later found him and gave him to the emperor. When Otto promised to let him live, Benedict gave up. Official acts would remove the privileges he had as pope, take away his support staff and remove him from his position.

Otto had Benedict sent to Hamburg, Germany and exiled him from Rome with the help of the new pope. Archbishop Adaldag took him under his care and gave him a home. He spent his final days serving the Church and being happy with his new surroundings. There are some rumors that Romans came to bring home just days after he died.

*He was born circa 915 and Roman.
*The only other name connected to him during his life was Benedetto.
*He died on July 4, 965.
*Though he died and was buried in Germany, his final resting place is in Rome.
*His papacy began on May 22, 964.
*The papacy of Pope Benedict V ended on June 23, 964.
*Pope Leo VII succeeded Benedict V as pope.

*Benedict V is one of the only popes in history to willingly leave the papacy. Given the attack by Otto though, historians believe that he did not have much choice in the matter.
*Though he was buried in Hamburg, he was later returned to Rome. Records do not show where he was moved to or his final resting place.
*A local German legend claims that Benedict knew someone would move his body and that it would lead to war and strife. Not long after they moved his body, Germany had a major internal war.
*Benedict V served as pope for only 32 days. The entire time he was pope, sides were feuding over his appointment.
*After his exile, some within the Church spoke out for the removal of his name from the official records. They claimed he was an antipope rather than a full pope.