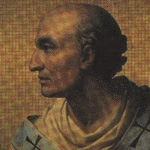 Pope Benedict XI was an Italian man who reigned as pope from 1303 to 1305. His papacy began less than two weeks after the death of Pope Boniface VIII. This article looks at his time with the Order of Preachers and his time as pope.

Born in 1240, Pope Benedict XI was the son of a man named Boccasini and received the name Nicola upon his birth. He lived with his parents and younger sister in S. Bartolommeo. His mother, Bernarda, worked as a laundress and inherited a large sum of money from a friar. The monk’s will promised Nicola even more if he became a monk. He would use some of that money to study under his uncle and after he joined the Order of Preachers.

Nicola later studied in Venice and other parts of Italy before and after becoming a monk. Named the Provincial Prior of Lombardy in 1286, he was responsible for overseeing several convents and making sure they followed the rules and standards of the Church. He became the Master of the Order of Preachers in 1296 and issued a decree that officially stated Boniface VIII was the pope. This decree also prohibited others from claiming other men were the pope. Nicola also served as a Cardinal Priest.

The papal election of 1303 lasted for just one day. Those who voted in the election overwhelmingly voted for Nicola because they believed that he would not fight King Philip IV. The first action he took as pope was to welcome the King back to the Church and end the excommunication done by the last pope.

As pope, Benedict XI helped King Philip reach a compromise with King Edward I of England. He was pope for only 259 days when he died unexpectedly while in Umbria. Some claimed that a man named Nogaret poisoned the pope. No evidence from the time or later proves this theory. Clement V was elected the next pope and chose to spend his papacy outside of Rome.