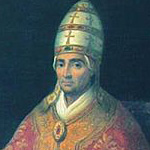 Pope Benedict XII was the 19th pope and served from 1334 to 1342 for more than seven years. He was French and was a Pope at Avignon, which was popes who ruled outside of Rome. This article will help readers find out more about his life as a pope and the time before the papacy.

Born Jacques Fornier, historians know little about the man who would become Pope Benedict XII. He was born sometime in the 1280s, though records do not list an official date of birth. Historians believe he was born in a southwestern region of France called Cante. Feeling called to work for the Church, Jacques became a monk with the Order of Cistercians and later attended the University of Paris. Before becoming pope, he was both the Abbot at Fontfroide Abbey and the Bishop of Parmiers.

After Pope John XII passed away, a conclave met to discuss the next pope. More than half of those in attendance were in favor of a cardinal who also served as the Bishop of Porto. Jean-Raymond de Comminges refused to promise them that he would keep the papacy in Avignon. Fearing that he would move back to Rome, the conclave spent more than a week going over other names before finally settling on Jacques.

As pope, Benedict XII wanted to establish his bulls and decrees without taking into consideration the work of previous popes. He believed that monks should live in poverty and not have the benefits that they had at the time. The pope also tried to reach a compromise between the Holy Roman Emperor Louis IV and the Roman See. He also made attempts to separate himself from France and return the papacy to Italy. Following his death in 1342, Pope Benedict XII was interred in Avignon Cathedral in a tomb that remains there today.