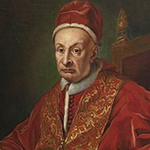 Benedict XIII was the 245th leader of the Catholic Church and the 13th among that lot to choose the papal name of Benedict. This article seeks to distinguish him from his many predecessors and successors by focusing on specifics and details of his life and papacy.

Pietro Francesco Orsini was born in the city of Gravina in Puglia. He was the firstborn son, of six, to hail from the union of Giovanna Frangipani della Tolfa and Duke Ferdinando III Orsini. Upon reaching age 18, he gave up his inheritance and changed his name in order to enter the Dominican Order. “Vincenzo” Orsini joined the priesthood in February of 1671. Thanks to the political and financial clout of his family, Pope Clement X decided to appoint Vincenzo the Cardinal-Priest of San Sisto roughly one year after he become a priest. He taught philosophy at Brescia, served as bishop of Mandredonia and Cesena, then became the archbishop of Benevento. After the a pair of earthquakes jostled the area in 1688 and 1702, he decided to organize charities to assist victims of the tremors.

Pope Benedict XIII was a man more concerned with good works and spirituality than politics and statesmanship.