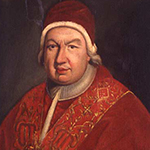 Benedict XIV was the 247th leader of the Catholic Church and the 14th among that lot to take the name “Benedict.” This article seeks to distinguish him from his many papal forebears and successors by focusing on specifics and details of his life and papacy.

Prospero was born to Bolognese nobility and was the middle of five children belonging to Marcello Lambertini and Lucrezia Bulgarini. After years of education through private tutors, Prospero was sent to Convitto del Porto, then Rome’s Collegio Clementino at the age of 13. That later educational institution is where he focuses on Latin, philosophy, rhetoric and theology. After spending an enjoyable amount of time studying those subjects, he gained an interest in civil and canon law. After turning 19 in 1694, he received doctorates in both subjects. After joining the church, Lambertini assisted Msgr. Alessandro Caprara whom served as Auditor of the Rota. One year into Clement XI‘s papacy, Lambertini became a consistorial advocate, then Consultor of the Supreme Sacred Congregation of the Roman and Universal Inquisition and then Promoter of the Fatih in 1708. During his tenure in this position, he saw to the canonization of Pius V and composed a treatise on beatification and canonization. Come 1712, Lambertini became Canon Theologus for the Vatican Basilica and also joined the Sacred Congregation of Rites. 1713 saw him become monsignor and then the Sacred Congregation of the Council’s secretary in 1718. In June of 1724, two weeks into Benedict XIII‘s papacy, Lambertini became the bishop of Theodosia. A year later, Bishop Lambertini ordered that Bologna’s Istituto delle scienze ed Arti Liberali be painted by Carlo Salarolo. January of 1727 would see him become Bishop of Ancona and allowed to maintain his other titles and offices, including Abbot Commendatory of Pisa’s S. Stefano di Cintorio. He became cardinal on December 6th, 1726, serving Gerusalemme’s Santa Croce church. April 30th, 1731 saw him become Bologna’s archibishop, during which time he would pen the three volume “De synodo dioecesana,” a text concerned with many aspects of the diocesan synod.