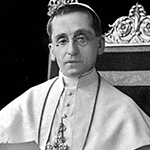 Benedict XV was the 258th man to lead the Catholic Church and the 15th to assume the papal name “Benedict.” This article will be focusing on his personal history and works in order to make it easier for students to recall and analyze.

Giacomo della Chiesa was born to Marchese Chiesa and Marchesa Migliorati. Even as a young man, he desired to become a priest; his father rejected Giacomo’s young wishes and pushed his son toward the pursuit of law. Marchese Chiesa would get his wish on August 2nd, 1875, the date Giacomo earned his doctorate in Law from the University of Genoa. Notably, this university’s politics were very harsh of the clergy and Catholicism due to Italian unification.

Despite the political climate he had earned his degree within, Giacomo once again sought his father’s blessing to serve God. While the Marchese reluctantly admitted that nothing could stop his son, he gave Giacomo his blessing on the condition that he study theology in Rome, away from Genoa. It was the Marchese’ hope that Giacomo would become something greater than a village priest or the Monsignore of a single province. Giacomo enrolled into Rome’s Collegio Capranica.

Giacomo became Father della Chiesa on December 21st, 1878 and from 1883, would study at Rome’s Pontificia Accademia dei Nobili Ecclesiastici. After pursuing the weekly practice of defending a research paper in the company of the Roman Curia, della Chiesa gained the attention of Cardinal Mariano Rampolla. Rampolla would expedite della Chiesa’s career by pushing him into the Vatican’s diplomatic endeavors in 1882. Della Chiesa would serve Rampolla as his secretary before being posted to Madrid. During his time under Rampolla, della Chiesa managed to arrange relief efforts during rampant cholera and also successfully negotiated an argument concerning the ownership of the Caroline Islands between Germany and Spain.

Shortly after Leo XIII’s death, Cardinal Rampolla sought to appoint della Chiesa to the position of conclave secretary. The Holy College stepped ahead and chose Rafael Merry del Val. When Rampolla left his post upon Pope Pius X’s election, della Chiesa became del Val’s subordinate. On December 18, 1907, della Chiesa would be appointed Archbishop of of Bologna in front of his family, the Vatican’s diplomatic corps, several cardinals and bishops and even Rompalla; February 23 of the following year would see him relocate to his dioceses. Bishop della Chiesa would make sure to visit each of his parishes, paying special attention to the mountainous ones that required a horse to reach.

On May 25, 1914, roughly half a year after Rompalla’s death, della Chiesa would be elevated to Archbishop della Chiesa. Upon returning to Bologna, he was beset by a Socialist uprising within Central Italy that resulted in vandalism, looting and ransacking of churches, utilities and railways. While Bologna managed to remain intact, much of the region slid toward Socialist politics. One of della Chiesa’s final acts in his capacity as an archbisop was to remind the globe of what the Church stood for as World War I began.

The bulk of Benedict XV’s efforts were put toward minimizing tensions during World War I, especially as each faction had its own opinions on the influence of the Church. Even when he sought to remind all parties involved that the Holy See was a neutral party and after multiple attempts to mediate the hatred, the fact that the differing factions had different religious beliefs did little to make simplify Benedict XV’s efforts.

On the 1st of August, 1917, Benedict XV penned a seven-point plan for ending the war. This plan called for righteousness over weaponry, a reduction of armaments among all parties, a means of pursuing international arbitration, true liberty and rights at sea, the renunciation of indemnities committed during wartime, the evacuation of occupied territories and a thorough examination of each faction’s claims.