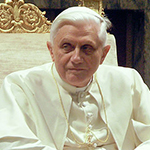 Benedict XVI was the 265th man to lead the Catholic Church and the 16th to assume the papal name “Benedict.” This article will focus on his personal life, time with the church and notable aspects of his papacy to make it easier for students to learn and retain.

Joseph Ratzinger was the third of Joseph Sr. and Maria Ratzinger’s three children. After a visit from Cardinal Michael von Faulhaber, when he was only five years old, Joseph was so enthralled with Cardinal Faulhaber’s attire that he decided he wanted to become a cardinal. Joseph’s childhood was plagued with harassment due to his family’s anti-Nazi politics; this became worse upon turning 14 years old and being drafted into the Hitler Youth. Joseph did his best to become as unproductive as he could. A few years later, while studying in seminary, Joseph was drafted into the Luftwaffenhelfer, anti-aircraft sector and was subsequently placed within the German infantry. During his time with the infantry, he spent several months interned at a P.O.W. camp. before the war was over.

In November of 1945, Jospeh and Georg Ratzinger both enrolled into Traunstein’s Saint Michael Seminary, then Munich’s Ducal Georgianum within the Ludwig Maximilian University.

On June 29th, 1951, both Ratzinger boys were ordained by Cardinal Faulhaber. Two years later, Joseph would begin writing a dissertation on St. Augustine. in 1958, one year after completing his dissertation, he became a professor at Freising College. A year later, Joseph would transfer to the University of Bonn. 1963 would see him change institutions again, moving to the University of Münster.

He also served Vatican II as a peritus, a theological consultant, to Cologne’s Cardinal Frings. Ratzinger was seen as a reformer who cooperated with other theologians. Ratzinger was also fond of Karl Rahner, a well-regarded academic, reform theologian.

1966 would see Ratzinger become the University of Tübingen’s chair in dogmatic theology. In “Introduction to Christianity,” a book he wrote in 1968, Ratzinger stated that the pope must hear all sides of a Church issue before deciding upon a course of action but downplayed the central nature of the position. This point in his life is also when he moved away from Marxism and the politics of Tübingen. As rioting broke out in the spring of 1968, Ratzinger interpreted the chaos and tumult as a consequence of departing from Catholic doctrine. Despite being a reformist, he was perceived as conservative as liberal ideas began to soak into the Church.

1969 would see him return to his homeland of Bavaria, specifically the University of Regensburg. Three years later, he would co-found Communio, a theological journal that has since become the most prominent journal for contemporary Catholic theology. Until becoming pope, Ratzinger was the journal’s most prominent contributor. Ratzinger served as the University’s vice president from 1976 until 1977.

March 24, 1977 saw Ratzinger’s appointment to Archibishop of Munich and Freising. On June 27th, Paul VI named him Cardinal-Priest of Santa Maria Consolatrice al Tiburtino. During the Papal Conclave of 2005, Ratzinger was one of 14 cardinals appointed by Paul VI and one of three under age 80.

November 25, 1981 would see Ratzinger become the Prefect of the Roman Inquisition. 12 years later, in 1993, he would become Cardinal Bishop of Velletri-Segni, vice-dean of the College of Cardinals in 1998 and then its dean four years later. In 1997, at the age of 70, he requested Pope John Paul II to allow him to leave his position as Prefect in order to become an archivist for the Vatican; John Paul II declined.