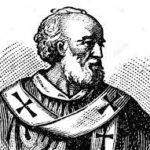 Pope Boniface II was the 55th pope and served for just over two years before his death. Most know him as the first Germanic man chosen for the role. This article will go into greater detail about Pope Boniface II.

Pope Felix IV worked closely with Boniface II and choose him as his successor. Boniface II was an archdeacon at the time and known for his close relationship with the pope. When Pope Felix IV realized that he was close to death, he convened a team at his bedside and told members of the Catholic clergy that he selected Boniface II as the next pope. Both Boniface II and Dioscorus were chosen as pope and competed against each either directly for the role. Upon his death less than a month later, Boniface was officially chosen as the new pope.

In the hopes of eliminating the issues associated with his papacy, Boniface II called together the second synod and suggested a new constitution. This new rule would give popes the right to select and name their successors before their deaths. Though some approved of the plan, others did not. Within a few years, the Church would cancel the constitution, which led to Boniface II burning his copy of the order.

One of the largest moments associated with Boniface II is the Council of Orange. Also known as the Second Synod of Orange and the Council of Orange 529, it brought together bishops from the Ostrogothic Kingdom. This would change the interpretation of Augustine and lead to scholars in the future interpreting those words in new ways. Boniface II confirmed the decisions made by that council, including the concept that religious leaders must teach grace to help their parishioners achieve salvation.

Boniface II outlived Dioscurus by nearly two years. He served as pope from September of 530 to October of 532. Historians are unsure of his cause of death but generally believe that he passed away from natural causes. Just a few days after his death, Boniface II was buried in St. Peter’s Basilica.

*Boniface II was born in Rome, Italy circa 450.
*There are no records to indicate his name at birth.
*He died on October of 532 in Rome.
*Due to his advanced age, historians believe that Boniface II died of natural causes.
*The Church elected him as pope on September 17, 530 and crowned him on September 22 of that same year.
*His papacy ended upon his death in 532.
*John II succeeded him as pope.