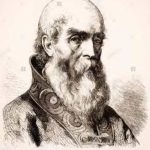 Pope Boniface III was a Greek and Roman man who served as the 66th pope in 607. He only held the position for 266 days before he passed away. We will look at his election and time as a pope in this article.

Known as Boniface following his birth, the future pope was both Roman and Greek. His father was John Cataadioce who was Roman. The pope’s mother likely came from Greece. Pope Gregory I appointed him to a cardinal position on October 15, 590, which was his first position within the Church. He also served as a deacon and spent more time with the pope. That relationship led to the pope naming Boniface III as an apocrisiarius. As a diplomat, he spent quite a bit of time in Constantinople. The time he spent there and the people he surrounding himself with helped shape him as a man and influenced some of the work he did as pope. He became a close confidant of Emperor Phocas and worked with him on several occasions.

During this era, bishops working for the Church had the right to name the next pope without going through a formal election or selection process. Noting the work that Boniface did in Constantinople, they chose him as the next pope. Though Boniface accepted the position, his work kept him in Constantinople. It took almost a year before he returned and became pope.

The Papacy of Pope Boniface III

One of the biggest changes that he made as pope regarded how the next pope was selected. He issued a decree that stated no one could name or discuss the next pope while the current one was still alive. Those who violated the decree faced excommunication. A second decree stated that in honor of the last pope, the successor would not take the position until at least three days passed. Boniface III worked with the emperor several times after becoming pope and established decrees used for many years. After serving as pope for 266 days, Boniface III passed away on November 12. Boniface IV became pope the following September.