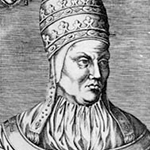 Pope Boniface IX was the 203rd pope and reigned from 1389 to 1404. He was pope during a period called the Western Schism where the Church was divided. This article looks at his rule and the life of Boniface IX before he became the pope.

Born in Naples somewhere between 1348 and 1350, the future pope was named Pietro at birth. He also used similar names, including Piero and Perino. His family moved from Genoa to Naples and settled there before his birth. A medieval historian from the modern era stated that Pietro was illiterate and had no formal training, though no records show this. Pope Urban IV made him a cardinal in 1381. He was consecrated in 1389.

Pietro became pope during the Western Schism. Clement VII claimed that he was the rightful pope after the election of Pope Urban VI. French cardinals would later elect Benedict XIII in direct opposition to the Church in Rome. At the Papal Enclave of 1389, Roman cardinals elected Pietro as their new pope. He chose the name Boniface IX.

Though Benedict XIII claimed that he was the true pope, the people of Rome sided with Pope Boniface IX. Due to issues in Rome, he spent most of his time outside of the city. He lived in both Perugia and Assisi. King Richard II of England and several leaders from other countries urged the pope to abdicate the throne and give it to Benedict XIII. He would instead oversee the jubilee celebrations in the city and rally some to lead a new crusade to little avail.

During his later years, the pope sided with Rupert as the new King of Germany. He also issued a decree regarding how the Church could sell property. In 1404, he came down with an illness that caused him to spend several days in bed. Despite resting and taking care of himself, he never recovered. Pope Boniface IX died on October 1 of 1404.