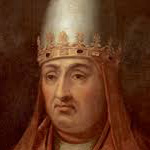 Pope Boniface VIII was the 193rd pope and one of the most controversial from history. He reigned for more than eight years and was responsible for Unam Sanctum. This article will go over his life and some of those controversies.

Given the name Benedetto at birth, the man who would become Pope Boniface VIII belonged to the Caetini family. His uncle was a high ranking official in Italy. He also had a grand-uncle who served as pope, Pope Alexander IV. While working with his uncle, Benedetto joined the Order of Friars Minor and spent time in their monastery. Pope Martin IV consecrated him as a cardinal in 1281.

Pope Celestine V was one of the only popes to abdicate the throne. Some of the records from this time state that Benedetto was one of a small group who asked the pope to resign. Ten days after he resigned, 22 cardinals met in Rome to name the next pope and chose Benedetto who immediately selected the name Boniface V.

One of the more controversial acts that Pope Boniface VIII performed was the issuance of Unam Sanctum. Released in November of 1302, it was a response from the pope during his long-standing battle with the King of France. It essentially declared that the pope acted on the authority of God and that the pope was the supreme ruler. He believed that everyone should bow to him.

Death and Other Controversies

Pope Boniface VIII was also known for his excommunication of the King of France and for taking control over land owned by an Italian family. He took the land by force and then gave it to his loved ones. After he excommunicated other French men, the King sent men to Rome to abduct him. They held him for three days and severely beat him, which likely contributed to his death a few weeks later. After professing his faith and taking the sacraments, he passed away surrounded by some of his closest allies. They later reported that he was strong in the days leading to his death.