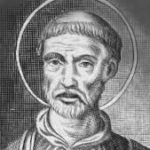 Pope Callixtus I as the first of three popes to choose the name Callixtus. He was the 16th pope of the Church and one of the early men martyred for their beliefs and positions. Having spent his early years as a slave, he had a deep commitment to helping the poor. The life and death of Pope Callixtus I are some of the topics covered in this article.

Born circa 155 AD, Callixtus was known as Kallistos until he became the pope. Though Greek by birth, he was born and raised in Rome and spent his whole life living in the Roman Empire. Callixtus was a slave and belonged to a man named Carpophorus. His master collected funds from other Christians in the area to help young children and widows in need. He gave the funds to Callixtus and asked him to deliver the money. Callixtus lost the money and escaped. When he was captured, the man attempted to run away but was captured a second time and sent back to his master.

In the hopes that Callixtus would repay the money he lost, his master let him go free. He was caught trying to force Jewish people in a local synagogue to repay their debts by force. This led to him being arrested and sent to work in the mines. He became so sick in the mines that he was sent to Anzio to recover. Pope Victor believed that he was a good man who made some bad choices and gave him a pension for support. It was during this time that Callixtus turned to the Church and became a deacon.

As the 16th pope, Callixtus established policies that allowed heretics and others who spoke out against the Church to return. He converted some and absolved others of their sins. The pope believed that even those who murdered others, used early forms of birth control and indulged in other major sins were worthy of the Church. This led to Hippolytus rising as the antipope and converting followers to his side who did not agree with the pope.

Callixtus practiced in the Basilica di Santa Maria and was martyred there in either 222 or 223. A popular legend from the time claimed that opponents attacked him in the church and threw his body in a well, leaving him to die there. Though modern historians doubt this happened, the church still has the remains of an ancient well on the property. The legend also claims that Saint Asterius of Rome traveled to the church in the darkness of night and recovered the pope’s body, which he then had moved to the Cemetery of Saint Calepodius. For his actions, one of the pope’s opponents had Asterius arrested and thrown from a bridge. During the 9th century, the relics of Pope Callixtus were set to his former church in Santa Maria.

Quick Facts About Pope Callixtus I

Interesting Facts About Callixtus I

Pope St. Callixtus I was the sixteenth Pope and is now considered a saint. He reigned for about 5 years in the early 200s. His life is intriguing because of his controversial policies, humble beginnings as a slave and the little reliable information that historians have found about him.

Callixtus started out as a slave working for a Christian in the Roman Emperor’s court. He managed funds for his master, which he lost. He ran away but was later caught and returned to his master. Investors arranged his release in the hopes of getting some money back, but he was arrested again after fighting with Jews in a synagogue, presumably over a financial dispute. Persecution of Christians may have also contributed to his arrest. At this point he was sent to a forced labor mine at Sardinia, where he may have acted as a confessor. He was freed by Pope Victor I with the help of the Roman Emperor’s mistress, Marcia, in an effort to free detained Christians, and he received a small allowance from the Pope. Callixtus then moved to Anzio.

From Anzio, Callixtus was summoned back by Pope Zephyrinus to act as a deacon. Pope Zephyrinus put him in charge of taking care of a burial ground, and Callixtus soon rose to become his archdeacon and principle advisor. His close ties to the Pope made him an obvious successor.

Once he became Pope, Pope St. Callixtus I also had very lenient policies on who could be pardoned for their sins. He pardoned people for previously unforgivable sins such as adultery and murder once they repented. He even allowed these people to receive Communion after their penance. Bishops benefited from his lenient policies because he didn’t remove them from office for committing mortal sins if they repented. He even pardoned former heretics and accepted unrepentant people from other sects of Christianity and allowed them to take Communion. Pope St. Callixtus I’s lenient policies extended to marriage laws as well. He allowed high-born women to marry commoners and slaves, even though it was against Roman law. He also allowed lower members of the clergy such as parish priests to get married and ordained clergy members who had been married multiple times. Because of Pope St. Callixtus I’s policies and views, Saint Hippolytus considered him a heretic.

Saint Hippolytus refused to acknowledge his rival as the Pope, so he gathered his own followers and created a schism in the Church. By creating this split, he became known as the first antipope.

Pope St. Callixtus I’s time as Pope was very short due to his early death in 222. Although he had many controversial policies, he had already started putting them in motion during Pope Zephyrinus’s reign, so he mostly continued the work he had previously done.

• Pope St. Callixtus I was born in what was then known as Rome, Italia, Roman Empire. Historians are unsure of his birth year, but some place it around 155.
• Born Callixtus or Callistus, the Pope did not change his name when he ascended to the papacy.
• He died on October 14, 222.
• Pope Callixtus I was martyred in a popular uprising against Christians. Legend states that he was stoned to death and thrown in a well, but no historical evidence confirms this. After his martyrdom, he was made a saint.
• The clergy voted him into the papacy on December 20, 217 after the death of Pope Zephyrinus.
• Callixtus I remained Pope until his death in 222.
• Callixtus I’s rival and antipope, Hippolytus, became his successor and reigned until 235.

• Pope Callixtus I took care of a Christian burial ground that may have been the first property owned by the Roman Church. It is now named “the Catacombs of St. Callixtus” after him.
• He was also the first to have a rival “antipope,” Hippolytus, who created a split in the Church.
• A church was built where Pope Callixtus I had built an oratory when a tavern-keeper attempted to build a tavern there. The Romans did not support the Christian religion, but they preferred the construction of a church of any religion to the construction of a tavern. Therefore, the Church of St. Maria in Trastevere was built.
• Another church, the Church of St. Callixtus, was built around his place of death and contains the well into which he was allegedly thrown.
• He was one of the most lenient Popes; he was among the first to pardon people who had committed mortal sins and grant them Communion after their penance.
• He left no writings behind. All of the historical information on him comes from the writings of his rivals.
• People still observe his feast day on October 14, which is believed to be the date of his death.