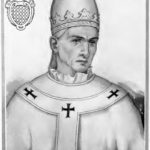 The second pope to use the name Celestine, Pope Celestine II reigned for 164 days between 1143 and 1144. He was one of several popes during the 12th century who ruled for less than one year. This article introduces Pope Celestine II to those who want to learn more about him.

Known as Guido when he was born circa 1085, the boy who would grow up to become Pope Celestine II was likely the son of a nobleman. Many believe that his father was Niccolo di Castello. During his later years, he worked with Pierre Abelard and developed a strong understanding of theology. After working for several schools, Guido found his way to the Church and became a subdeacon. He was appointed a cardinal deacon in 1127 and worked for the Santa Maria in Via Lata. After becoming a full cardinal, Guido became a cardinal priest in San Marco.

Before becoming pope, Guido participated in two papal elections. He was in Rome in 1130 when Church members elected Innocent II and during the 1143 election that occurred before his election. When Innocent II passed away, he became the top choice for the cardinals responsible for electing the next pope. Only two days after the death of Pope Innocent II, Celestine II became pope.

Whether due to his age or health, Celestine II seemingly knew that his time as pope was limited. One of the first things he did after accepting the throne was to write letters to a group of monks and Peter the Venerable. Those letters urged the men to pray for the pope. He disagreed with the Treaty of Mignano that Innocent II approved and refused to sign it. Celestine also refused to work with King Roger II of Sicily despite the relationship he had with the last pope.

King Louis VII of France had problems with Innocent II because the pope named Pierre de la Chartre the new archbishop. The king was episcopal and did not believe the other man should be an archbishop. Celestine helped the two men come to an understanding, which led to the pope absolving the king. While visiting Saint Sebastian, the pope passed away in a local monastery. Pope Celestine II was brought back to Rome for burial.

*When he was elected pope in 1143, it was the first papal election in more than 80 years that include only one name. During previous elections, Church members argued about who should become pope, which led to the rise of several antipopes.
*The Prophecies of St. Malachy list the names of several popes and placed Pope Celestine II as the first.
*Though the Church had Pope Celestine II buried on the ground of the Lateran, there are no records to show his exact burial spot. This is likely due to the Church using that same name for several buildings.
*Though Celestine II was a cardinal for nearly 16 years, he was only pope for 164 days.
*Celestine II was one of several popes who served as papal legates before their elections. During his time as a legate, he traveled to both Germany and France.