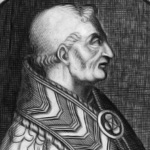 Pope Celestine IV was the 179th pope and the fourth to choose the name Celestine upon his election. Though his reign lasted for only 16 days, there is some dispute among historians because he was never had a coronation ceremony. This article looks at his short reign.

Church records do not show much about the early life of the future Pope Celestine IV. He was born in Milan, Italy and grew up in the Papal States region. The first official record that lists him shows that he was a chancellor in Milan. Those records show that he accepted the position sometime between 1219 and 1227. Known as Goffredo or Godfrey, he became a cardinal and received his appointment from Pope Gregory IX. That appointment gave him control over San Marco. The pope also sent him to Tuscany and Lombardy to oversee a situation concerning Frederick II. Though he worked as a legate, he couldn’t bring the areas back to the Catholic faith. Despite his lack of success, he became a cardinal-bishop and went to work in Sabina.

When Pope Gregory IX passed away in August of 1241, the cardinals responsible for appointing a new pope were mixed on who to pick. They wanted someone who could stop Frederick II, but others sided with him. Frederick II retaliated for this lack of support through the kidnapping of two cardinals who he brought back to his palace. There were also issues with some cardinals calling for the appointment of Innocent IV. Frederick II instead demanded that they select Pope Otto. Seven of the 10 cardinals who voted in the election cast their choices for Godfrey in October of 1241.

The 10 cardinals who elected Pope Celestine IV traveled with him to Sette Soli. Several members of noble families along with multiple princes and a senator kept them there until his appointment. Though he was somewhere between the ages of 54 and 61, Celestine IV was upset over the conditions surrounding his election and with the disputes between the cardinals and Frederick II. The stress that he experienced combined with his poor health led to him dying a few weeks after becoming pope. Due to his entrapment in the city, the cardinals never had the chance to hold a coronation for him.

*He was born circa 1180 in Milan, Italy, which was part of the Papal States. Historians place his date of birth as late s 1187.
*His birth name was Goffredo Castiglioni.
*Pope Celestine IV died on November 10, 1241.
*He died from natural causes in the Holy Roman Empire city of Rome.
*His papacy began on October 25, 1241.
*The papacy of Celestine IV ended on November 10, 1241.
*Cardinals appointed Innocent IV as the next pope in June of 1243.

*Some historians believe that the pope’s mother was the aunt of Pope Urban III, which would make them cousins. No records prove that the two popes were related.
*Pope Celestine IV does not appear on the list of the popes with the shortest reigns because he never had an official coronation. The Church does list him as an official pope though.
*Godfrey was Italian by birth and reigned for only 16 days. Some records list his reign as lasting for 15 or 17 days.
*Following the death of Pope Celestine IV, Frederick II imprisoned the cardinals responsible for electing the next pope. It took more than 20 months before the Church appointed the next pope.
*The final resting place of Pope Celestine IV is in the Vatican.