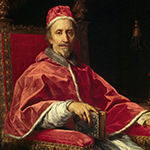 Clement IX was the 238th man to serve the role of leader for the Catholic Church and the ninth among them to choose Clement as his papal name. This article will try to distinguish him from the many other popes by showcasing his life, papal legacy and even give a few personal tidbits about the man at the end.

Giulio was born to the noble Rospigliosi family, the son of Giacomo and Caterina. His education entailed learning at the Seminario Romano and then as a Jesuit pupil at the University of Pisa. 1623 would see him earn doctorates in canon law, civil law, philosophy and theology; the last of these subjects would also be something he taught as a professor from 1623 to 1625.

Rospigliosi would later work within the diplomatic arm of the church, under Pope Urban VIII. 1644 would see him become Titular Archbishop of Tarsus and also becoming Spain’s Apostolic Nuncio from 1644 to 1653; he chose to retire from his post. He remained retired during Innocent X’s papacy due to a disdain for those connected to Urban VIII. He also became vicar of Santa Maria Maggiore in Rome. Pope Alexander VII would elevate Rospigliosi to the cardinalate in 1657, specifically as Cardinal-Priest of San Sisto Vecchio. He was also made Cardinal Secretary of State in 1655 and stayed in that position until being elected as pope in 1667.

Honestly, not much of historic significance occurred during the papacy of Clement IX.