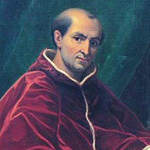 Pope Clement V was the 195th pope and one of several popes born in France. He reigned for more than eight years and is known for a papal bull issued against the Knights Templar. This article looks at his election and other details about the pope.

Pope Clement V was born sometime around 1264 in the Kingdom of France to a family who had a close relationship with the Church. Known as Raymond, he had a brother named Berard who served as the Archbishop of Lyon. Raymond worked as an officer and participated in some clergy meetings in the Cathedral of Saint Andre. He later moved from Bordeaux to Lyon to work with his brother as a vicar general, which led to his appointment as a cardinal-bishop and then a bishop. Raymond also worked with Pope Boniface VIII as a chaplain and later became the Archbishop of Bordeaux.

When Pope Benedict XI died in 1304, cardinals from France and Italy were divided on who to elect next. They spent several months arguing before finally selecting Raymond at a conclave. He was elected in June and crowned in November. Though many asked him to come to Rome for his coronation, he decided to stay in France and have his coronation in Lyon.

Best known for the decree he issued against the Knights Templar, Pope Clement V created a document that allowed the prosecution of those men. That prosecution led to rumors of sodomy and other illegal acts that some still believe today. Clement V remained in France during his reign and became the first of the Popes of Avignon. He spoke out against the Dulcinian movement and claimed that the followers were heretics. This was one of the last acts he performed before passing away on April 20, 1314. A popular legend claims that a storm started unexpectedly in the middle of the night and that lightning struck the church where his body lay in state. By the time the fire went out, there were only ashes left behind.