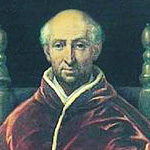 Pope Clement VI was the 198th pope and one of the Popes of Avignon who served the papacy while living in France. He is known for the actions he took and words he spoke during the black plague. This article looks at Pope Clement VI in greater detail.

Early Life and Rise to the Papacy

Pierre Roger was born in 1291 or 1292 in Maumont to a lord. Some records list his last name as Rosiers or Rogier. He grew up with two brothers and two sisters. While one brother later became a cardinal, the other married and had multiple children. When he was around the age of 10, he decided to study with the Benedictine monks and learn about their order. He stayed there for several years before attending the College of Sorbonne. Pierre would also obtain his teaching license and earn a doctoral degree. He served as a bishop and worked as a chancellor, which sent him to France. Pierre formed lasting relationships with several popes and became a cardinal before rising to the throne.

Prince John traveled to speak with the cardinals and push for the election of Pierre. The cardinals were already in the middle of making the decision when he arrived but agreed with both his and the King’s choice. Upon his election, he chose the name Clement VI and declared that he would treat the papacy differently than his predecessors did.

Most of what historians know about his papacy relates to his time during the plague. More than 30% of those in Europe died during this era. Though doctors told him that he could stay healthy if he kept torches burning around his palace, he ignored those claims and continued hearing the confessions of the sick and dying. Clement VI became sick during the early 1350s. He suffered from kidney stones that occasionally kept him confined to bed and later developed a tumor. During his final days, he developed an abscess that became infected and left him even sicker. He would eventually succumb to those issues and pass away in 1352.

*Clement VI was born circa 1291 in Maumont, which was in the Kingdom of France.
*His birth name was Pierre Roger.
*The pope died on December 6, 1352.
*He was either 60 or 61 when he died in Avignon from natural causes, including a tumor and kidney stones.
*His papacy began on May 7, 1342.
*The papacy of Pope Clement VI ended with his death in 1352.
*Innocent VI succeeded Clement VI as the next pope.

*Clement VI practiced nepotism in the same way his predecessors did. He appointed 25 cardinals during his reign as pope. Not only were most of those men from France but nearly half of them were his relatives.
*When the Huguenots attacked France in 1562, they both burned his grave and desecrated it because they did not follow his beliefs and because they disagreed with some of his policies.
*He was the fourth Pope of Avignon, a name given to popes who reigned while living in France. Three other popes would rule from France before the papacy returned to Rome.
*The pope used some of the money left behind by previous popes to beautify his home church and on artwork. After his coronation, the first two purchases he made were for musical performances.
*Though his final resting place was damaged, the Tomb of Clement VI still retains some of its original pieces, including the cover of the tomb and the sarcophagus.