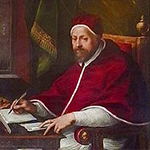 Pope Clement VIII was the 231st pope and reigned for more than 13 years. He is known for helping settle issues between the Jesuits and Dominicans and for the efforts that led to The Long War. You can learn more about Pope Clement VIII and his life in this article.

Ippolito Aldobrandini was born on February 24, 1536, in Fano, Marche. He grew up in the Papal State with a father who worked as a canon lawyer. That fostered his interest in law and led to the young man attending college to also study canon law. He eventually became an auditor and worked as a judge for the Holy See in the highest court of the time. Known as an administrator, he later came to the Church and was ordained as a priest. Just 12 years later, he was elected as the new pope.

Pope Sixtus V selected the priest as a papal legate and sent him to work in Poland. The Polish people supported him after he helped release a man they believed was the heir to their throne. When Pope Innocent XI passed away, the cardinals held a conclave to elect the next pope. They spent nearly a month before selecting Ippolito. They believed that he would use his legal background to settle disputes and help the Church.

Clement VIII created an alliance and sent soldiers to Hungary to fight the Ottomans. That war battled for years and became known as The Long War. He became friends with Henry IV and absolved the man, which led to the end of a long feud with France. The pope issued several papal bulls that blocked Jewish people from Rome and other territories controlled by the Church. Stricken with a case of gout in his later years, the pope was in so much pain that he spent many days in bed. Complications from that disease rapidly intensified in February of 1605 and led to his death a few weeks later.