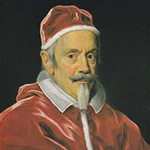 Clement X was the 239th man to serve as pope and the 10th to choose Clement as his name. This article will try to distinguish him from the many other popes by showcasing his life, papal legacy and even give a few personal tidbits about the man at the end.

Emilio was born to Lorenzo Altieri and Victoria Delfin. The Altieri were one of Rome’s oldest and most influential noble families and Victoria was Venetian nobility. Two of his maternal uncles had connections to the church; Flaminio was commander general of the Papal Armies and Gentile was bishop of Camerino. Emilio also had a brother, named Giambattista.

Altieri earned his doctorate in law from the Roman College in 1611. Upon finishing his education in 1623, he was made auditor to Giovanni Battista Lancellotti, nuncio of Poland. His proper ordination came in April 6th, 1624 and he would become the new bishop of Camerino after his uncle Gentile. Altieri would also become governor of Lorenta and the entirety of Umbria. Pope Urban VIII tasked him with protecting Ravenna from the ravages of the Po River.

During the papacy of Innocent X, he was made Naples’ papal nuncio, where he maintained the position for eight years. He is considered the source for the return to peace after Masaniello, a fisherman, led a revolt against Habspurg Spanish rule within Naples. His only work done under Pope Alexander VII was a secret mission in Poland.

Pope Clement IX made him the following positions: