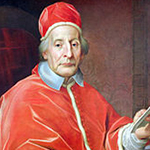 Pope Clement XII was the 12th pope to take the name of Clement and the 246th man to lead the Catholic Church and its Papal States. In acknowledgement of the vast number of personalities who have governed Catholicism, this guide has been created to distinguish Clement XII from the many other Clements, as well as the various other popes throughout history. Covered below is the gist of his time before becoming pope, any notable things he did or achieved during his papacy, a stat sheet and a handful of personal tidbits.

Lorenzo was born to the Florentine nobles Marquis Bartolomeo Corsini of Casigliano and Elisabetta Strozzi, the lattet being related to the Duke of Bagnuolo. He studied at the Jesuit Roman College, as well as the University of Pisa, in pursuit of doctorates in canon and civil law. Corsini would apply his education under the auspices of Cardinal Neri Corsini, his uncle.

After both his father and uncle perished in 1685, Corsini became the head of the Corsini clan. Rather than accept that mantle, he bought the rank of prelate and focused his time and money on growing the library he had acquired from Cardinal Corsini. Five years later, he would be made Archbishop of Nicomedia and the papal nuncio to Vienna. Despite the latter appointment, he did not go to Vienna as Holy Roman Emperor Leopold I had declared he was the one in charge of selection the nuncio from among three papal choices.

1696 would see Corsini rise to treasurer-general and governor of the Castel Sant’Angelo. After showing his excellence and competence during the pontificate of Clement XI, he was made Cardinal-Priest of Santa Susanna in May of 1706, yet continued to serve as papal treasurer. His power continued to grow during Benedict XIII‘s papacy, as Benedict XIII made him Prefect of the Apostolic Signatura, the Roman Curia’s judicial branch. He was also made Cardinal-Priest of San Pietro in Vincoli. His last pre-papal rank within the church was Cardinal-Bishop of Frascati.