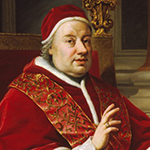 Pope Clement XIII was the 13th pope to take the name of Clement and the 248th man to lead the Catholic Church and its Papal States. In acknowledgement of the vast number of personalities who have governed Catholicism, this guide has been created to distinguish Clement XIII from the other Clements and other popes as a whole. Covered below is a summary of his time before becoming pope, a list of notable things he did or achieved during his papacy, a stat sheet and a handful of personal tidbits.

Carlo Reozzonico was one of two children born to Venetian nobility. His father was named Giovanni Battista Rezzonico, his mother was named Vittoria Barbarigo and his brother’s first name was Aurelio. He received his early education from Jesuit teachers within the city of Bologna, then sought doctorates in canon and civil law from the University of Padua. Armed with his doctorate, Carlo moved to Rome so that he might attend the Pontifical Academy of Ecclesiastical Nobles.

1716 would see him become Referendary of the Apostolic Signatura and 1721 would see him become the governor of Fano. It would not be until December 23rd, 1731 that he would become a priest. Six years later, Pope Clement XII would elevate him to the cardinalate, dispatching Rezzonico as the Cardinal-Deacon of San Nicola in Carcere. Cardinal Rezzonico would also fill several of the important offices within the Roman Curia.

Rezzonico would later be made Bishop of Padua in 1743, even receiving his consecration by Pope Benedict XIV. He was quite active in his diocese, seeking to reform it as best he could, especially in regard to its societal demands. Cardinal Rezzonico would also serve as the Cardinal-Priest of Santa Maria in Aracoeli and of San Marco, in 1747 and 1755, respectively.