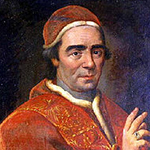 Pope Clement XIV was the 14th pope to take the name of Clement and the 249th man to lead the Catholic Church and its Papal States. In acknowledgement of the vast number of personalities who have governed Catholicism, this guide has been created to distinguish Clement XIV from the other Clements and other popes as a whole. Covered below is a summary of his time before becoming pope, a list of notable things he did or achieved during his papacy, a stat sheet and a handful of personal tidbits.

Giovanni Ganganelli was the second of Lorenzo Ganganelli and Angela Serafina Maria Mazza’s children. While he began his studies at Verucchio, he would broaden his education by studying from Rimini’s Jesuits in 1717, though he also learned from the Piarists of Urbino. Gangenelli joined the Order of Friars Minor Conventual in May of 1623, even undergoing a name change. He became a full member on May 18th, 1724. From then until 1728, he studied theology at the convents in Pesaro, Fano and Recanati. He finished his theological education during 1731 in Rome, studying under the guidance of Antonio Lucci.

Fully ordained and educated, he spent a decade teaching philosophy and theology in Ascoli, Bologna and Milan. He would later become regent of his alma mater and then Definitor General of his order’s college in 1741. Come 1753 and 1756, he abstained generalship of his order, possibly because he wanted higher office. Ganganelli befriended Pope Benedict XIV and Benedict XIB in turn tasked him with verifying the merit of Jewish blood libel.

Clement XIII would elevate Ganganelli to cardinal on September 24th, 1759, appointing him Cardinal-Priest of San Lorenzo in Panisperna. This promotion came at Lorenzo Ricci’s insistence; Lorenzo was Superior-General of the Jesuits. Three years later, Ganganelli would become Cardinal-Priest of Ss. XII Apostoli.