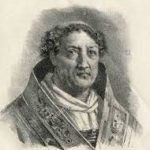 Pope Conon was the only man to choose the name Conon upon becoming pope and the 83rd pope in the history of the Church. He served for 335 and was something of a compromise chosen to make two sides happy. This article will look at the reasons he became pope and what he did during his tenure.

Known as Konon during his early years, Pope Conon was born in Thracia, which was a small territory in the Byzantine Empire. Some records indicate that his father was a soldier for the local military. To help their child succeed, his parents sent him to Sicily to get an education. Due to the rising taxes and other problems plaguing the area, he moved to Rome.

Work for the Church

Before he became pope, Conon worked for the Church in different roles. He became a priest while living in Rome and worked as a missionary bishop. Pope Leo II later made him a cardinal. Conon became known as a man of the people who worked for them and their needs.

Rome was in flux in the 680s as more people moved from the east to escape unruly leaders. When Pope John V died in August of 686, two separate factions emerged. One included the military and called for the appointment of a priest named Theodore. The second faction included most if not all of the clergy who supported an archpriest named Peter. Based on his looks and actions, the two sides agreed to a compromise and appointed Conon.

Pope Conon supported Franconia, which was a small region of Germany. He made Killian a bishop and encouraged him to do some of the missionary work that later helped him become a saint. Conon also took the side of Justinian II because he lowered the taxes on ordinary citizens. Some criticized Conon for that relationship because he exchanged papal properties for the tax decrease. Conon was also known for helping Justinian bring back more than 10,000 citizens from Lebanon.