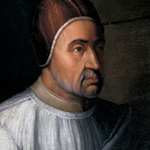 Pope Eugene IV was the 207th pope and reigned for more than 15 years. He was elected just days after the death of Pope Martin V and faced opposition from an antipope known as Felix V. This article looks at that opposition and other issues he faced as pope.

Born around 383, Eugene IV used the name, Gabriele. His family were wealthy merchants and used their money to properly educate him at local churches. He became the Bishop of Siena in 1407 and the Cardinal-Priest of San Clemente in 1408. After moving to the Basilica of Santa Maria in Trastevere, he became the Cardinal-Priest there. Pope Martin V assigned him the position.

Before becoming pope, Gabriele signed an agreement in which cardinals would receive 50% of all Church revenue. This agreement led to the cardinals quickly appointing him pope less than two weeks after Pope Martin V passed away. One of the first acts he performed was an attack on some of the relatives of the last pope. To end the attacks, they quickly gave him some of their land and money.

Pope Eugene IV quickly set about changing and ending some of the actions taking by his predecessor. He issued a bull that ended the Council of Basel, which led to the Holy Roman Emperor intervening. The pope held a council in 1483 in which he excommunicated several of the clergymen who participated in that early council. In opposition to Eugene IV, the Duke of Savoy appointed Felix V the antipope. Though many failed to recognize him, Felix V held this position for more than nine years and nearly two years after the pope passed away.

Several men called on the pope to intervene in a brewing situation between the Kingdom of Castille and Portugal, both of which thought they had the right to the Canary Islands. Eugene IV issued several decrees that some modern historians believe was a way to stop the enslavement of the native people. The pope was against heresy and believed in helping the poor, which he did despite the Church’s lack of revenue at the time. Pope Eugene IV passed away in 1447 and was buried in a tomb named after him in the Old St. Peter’s Basilica. This tomb was later moved.