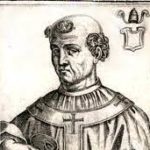 Pope Formosus was the 111th pope and the only man to ever choose the name, Formosus. He is best known for the posthumous trial that happened after his death, which involved his time as pope. This article will go over that trial and his more than four years as pope.

Known as Pope Formosus later in life, he was born in Ostia and named Formoso at birth. Though some records list his date of birth as 816, others show a much earlier date of birth around 805. Assigned a role as cardinal in 864, he became the Cardinal Bishop of Porto. The work he did as a cardinal-bishop led to Pope Nicholas I recognizing him and naming him a papal legate. In both 869 and 872, he went on diplomatic missions for the pope to France.

As the nephew of Charles the Bald, Formosus asked his uncle to come to Rome. Though nobles had selected him as the next Holy Roman Emperor, there was some dissension from within the Church. Fearing what might happen, many people fled from Rome. Pope John VIII asked them to return to discuss the matter. When Formosus remained hidden, the pope excommunicated him. When he agreed to not work as a priest and to stay away from Rome, the pope lifted his excommunication.

Despite his temporary excommunication, Formosus was a popular choice as pope. Some even brought his name up in 872. It wasn’t until the papal election of 891 that he became the top choice. Most of the cardinals who voted in the election picked him.

Formosus did little during his papacy. He spoke out against the Spoletos who invaded Italy and asked Arnulf of Carinthia to intervene. He also dealt with other invaders who attacked the western region of Italy. Not long after naming and crowning Arnulf the Holy Roman Emperor, the pope died. After the death of the next pope, Boniface VI, Pope Stephen VI led the Cadaver Synod. He put the former popes on trial and had the body of Formosus removed from his tomb at St. Peter’s Basilica. During the trial, the pope requested that cardinals consecrated under Formosus take their vows again. Though both Stephen VI and Sergius worked together during the trial, the Church later found that the trial meant nothing. It still considers Formosus a rightful pope.