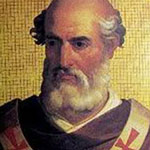 Pope Gregory IV was the 101st pope and the fourth to use the name Gregory, which he adapted from his birth name. He was pope for more than 16 years and known for intervening in feuds between Louis the Pious and his family. This article looks at those feuds and some of his other accomplishments.

Born circa 790, Gregorius was the son of a man named John and grew up around the Roman Catholic Church. He was one of the few clergymen at the time interested in learning and education. Pope Paschal I consecrated the young man as a priest. He later worked in the Basilica of St. Mark in Rome and later became a cardinal priest. It was while working in this position that other cardinals chose him as the pope following the death of Pope Valentine.

Unlike his predecessors, Gregorius did not believe that he was the right choice as the next pope. The cardinals found him working in the Basilica of Saints Cosmas and Damian. They led him to Lateran Palace and officially named him the pope elect just days after Pope Valentine‘s death. It wasn’t until December that he officially became pope. It took another few months before Emperor Louis agreed that he was pope.

During his more than 16 year reign, Pope Gregory IV oversaw disputes between the Holy Roman Emperor and his sons. He often sided with Emperor Louis and requested that the city observe All Saints’ Day and that clergymen learn music, two things that the emperor wanted. The pope was also on hand to witness the disputes that led to the end of the Carolingians. During his later years, Gregory IV became concerned with some of the churches in Rome and launched efforts to restore those buildings. Some of the later problems he had with the emperor occurred because the pope gave away Roman churches. Sergius II became the next pope on the same day that Gregory IV died in 844.