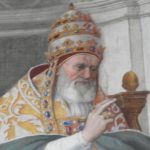 Pope Gregory IX is the 178th pope of the Roman Catholic Church and served the Church for more than 14 years in that role. He was the ninth man to choose the name Gregory upon his coronation. This article on Pope Gregory IX will discuss the history of the pope before and after taking on the role.

Not much is known about Pope Gregory IX before working for the Church. Historical records list multiple birth dates for him, all between 1145 and 1170. Known as Ugolino di Conti, he studied at the University of Paris and the University of Bologna. Innocent III was his cousin and appointed him the Cardinal-Deacon of a Roman Catholic Church in 1198. He also served as Dean of the Sacred College of Cardinals and Cardinal Protector.

The papal election of 1227 saw the Church select Ugolino di Conti as the new pope. He formally assumed the role a few days later and chose the name Gregory because the monastery of Saint Gregory is where he took his vows.

Gregory IX served as pope for more than 14 years, which makes him one of the longest-serving popes of the century. The University of Paris strike of 1229 occurred after an encounter between students and a local tavern owner, which led to students rioting in the streets. They would then go on strike for nearly two years. The pope issued a new bull to solve the problem and released a decree that laid out how both students and those working for the university could act.

During his tenure as pope, Gregory IX created a Papal Inquisition that established standards and rules that others had to follow in heresy cases. He would appoint men into positions based on how well they could follow those rules. Gregory IX was also for the Northern Crusades because he believed the wars would bring more men to the Church. He had a number of problems with Holy Roman Emperor Frederick II after the man announced plans to launch a new crusade. The fights between the two were intense and only ended when Pope Gregory IX passed away.

*As history did not record his exact date of birth, Gregory IX was either 57 or 71 when he became pope and either 82 or 96 when he passed away.
*Gregory IX was the pope responsible for canonizing Elizabeth of Hungary and making her a saint. He canonized her on May 25, 1235.
*The pope gave his full support to the Northern Crusades. Also known as the Baltic Crusades, these holy wars lasted from 1198 to 1290.
*Pope Gregory IX is one of the only popes in history to excommunicate the same person twice. He excommunicated Holy Roman Emperor Frederick II in 1220 and again in 1239.
*Gregory IX had a coat of arms that featured a gold key on one side of a red shield and a silver key on the opposite side. It also featured a crown on the top of the shield.