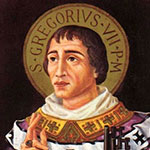 Pope Gregory VII was the 157th pope of the Catholic Church and often called Pope Saint Gregory VII as the Church canonized him. He ruled more for more than 12 years and struggled with Henry IV who was the emperor of Germany. You can learn about his canonization and papacy in this article.

Originally named ildebrando di Soana, the future pope was born in a small town in central Italy that is now part of Tuscany. His father was a blacksmith and made enough money that he could send him to Rome for school. His uncle worked in a nearby monastery and was able to keep an eye on him. He would accompany some of his teachers to Germany before returning to Rome and declaring that he wanted to become a monk. The young man worked for other leaders of the Catholic Church before becoming pope.

According to a popular story from the time, the bishops met in Rome to choose the next pope and hear someone shout out the man’s name. He would flee from the words and later tracked down to a library where he agreed to accept the position. Though some historians think that this happened on the spur of the moment, others think that a group of men picked him and shouted out his name at the same time to make him the popular choice. Once he ascended the papacy, he chose the name, Pope Gregory VII.

As pope, Gregory VII faced issues involving Henry IV who became the emperor of Germany after his father’s death. Henry IV was in his early 20s and inexperienced, which allowed the pope to gain some control over him. This would change as the emperor aged and received advice from his advisors. The emperor sent representatives to Rome to depose the pope, who in turn threatened to excommunicate the man. Pope Gregory VII would excommunicate the leader three times in his later years with support from the Normans. Henry IV eventually gained the upper hand and had the pope exiled before installing a new pope, Clement III who we know view as an antipope.

Despite having some support, Pope Gregory VII was forced to leave Rome by those who claimed he turned his back on the city and Church when he sought help from the Normans. He spent some time in Monte Cassino and then traveled to Salerno where he lived in a castle that looked out over the ocean. His later travels took their toll on his health, which was already poor due to his feud with the emperor. Pope Gregory VII released the excommunication orders that he wrote in Rome and passed away three days later of natural causes. Pope Benedict XIII canonized the pope in 1728, making him Pope Saint Gregory VII after the beatification done by Pope Gregory XIII.