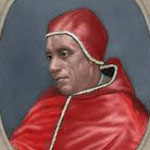 Pope Gregory XII was the 12th of the popes o use the Gregory name and the 205th leader in the history of the Church. Historians remember him as one of the only popes to abdicate the position, which he did a few years before his death. You can learn about why he left the papacy and other facts about Pope Gregory XII in this article.

Known as Pope Gregory XII during his papacy, he previously used the name Angelo Corraro, which was sometimes spelled Corario. Born in either 1326 or 1327, he devoted himself to the Church from a young age. Angelo became the Bishop of Castello in 1380 and lived there for a decade before becoming the Latin Patriarch of Constantinople. Pope Innocent VII would then make him a cardinal and a cardinal priest, which led to Angelo moving to San Marco. By the turn of the 15th century, he was back in Constantinople and working as an administrator on behalf of the pope.

Also known as the papal enclave of 1406, the papal election that years consisted of 15 bishops who opposed the idea of a Pope in Avignon. Benedict XIII named himself the antipope in 1394 and opposed both Pope Boniface IX and Pope Innocent VII. The bishops agreed to support Angelo if he would renounce Benedict as an antipope. Angelo only agreed to the election if Benedict would renounce his papacy, which would give the bishops the chance to elect any man of their choosing. This led to the almost unanimous election of Pope Gregory XII.

Angelo took his papal orders in November of 1406 and almost immediately met with Benedict to discuss the papacy. The King of Naples announced that he sided with Angelo who also had support from his wealthy family in Venice. The bishops who attended the Council of Pisa announced that they did not approve of either man and that Alexander V should be the next pope.

Though Gregory was the official pope, he faced opposition from those who sided with Alexander and other men. This led to the pope appointing two men to speak for him to continue the idea that he was the supreme leader of the Church. Knowing that his time was limited and that there was much opposition, the pope decided to abdicate. One of the cardinals he sent to the meeting announced that the pope planned to resign. The Council decided that Alexander was an antipope as was John XXIII who claimed the throne.

After leaving the papal throne, Gregory began using the name Angelo again and moved to Ancona in central Italy. He lived there from his resignation on July 4, 1415, until his death on October 18, 1417, more than two years later. Angelo seldom spoke of his papacy and was quiet about his experience. Following Angelo’s death, he was buried in a local church.