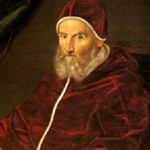 Pope Gregory XIII led the Catholic Church from 1572 to 1585 and was the 226th pope. Historians know the pope for the work he did with Asian countries and the changes that he made to the traditional calendar. You can learn other interesting facts about Pope Gregory XIII in this article.

Ugo Boncompagni was born on January 7, 1502, in Bologna to Cristoforo and his wife, Angela. He would later leave the family home to study law, which he taught after finishing his degree. Ugo had a close relationship with a woman named Maddalena that resulted in a son. Though he gave his son his name, Ugo did not marry the boy’s mother and instead turned to the Church.

When Ugo was in his 30s, he went to Rome and worked with Pope Paul III as a judge and in other positions. While working with Pope Pius IV, he strengthened his relationship with the Church and became a cardinal and then a cardinal deacon. While attending the Council of Trent, he met King Phillip II of Spain who would send him to check on the Cardinal of Toledo. Ugo formed a closed bond with the king that continued through his papacy.

Following the death of Pope Pius V, the bishops turned their attention to Ugo and selected him as the next pope. They spent less than one day selecting him and almost immediately had him take his papal orders. Some historians today believe that the bishops selected Ugo due to his relationship with the king.

Pope Gregory XIII quickly began reforming the Church and making changes that he believed it needed. He helped found many colleges affiliated with the Society of Jesuits and changed the existing calendar. Gregory agreed with those who thought the current calendar was too long and implemented changes to shorten it. He also believed that Protestants were traitors to the Church and encouraged King Phillip to remove Queen Elizabeth I from her throne in England.

Some remember Pope Gregory XIII for the favors he granted to those in Asia, which he believed would help the teachings of the Church spread. He was not as kind to those from other nations. The pope was especially hateful of Queen Elizabeth who he excommunicated from the Catholic Church. Gregory encouraged Catholics to agree with the Queen and follow her rules until a time arrived when they could remove her from the throne.

The pope became ill on April 5, 1585, and suffered from a high fever. He held Mass two days later and attended several meetings, but many of those in attendance noticed that he was sick. Gregory became sicker on April 10 and spent much of the day in bed. Those close to him noticed that he had a weak pulse and sweated profusely as his fever rose. Pope Gregory XIII would pass away later that day just minutes after receiving the Anointing of the Sick.