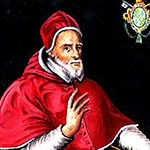 Pope Gregory XIV was the 229th pope of the Catholic Church and held the position for less than a year between 1590 and 1591. He changed one of the rules that a former pope issued on abortions and threatened those caught gambling on papal elections with possible excommunication. The short papacy of Pope Gregory XIV is one of the things we’ll address in this article.

Niccolò Sfondrato was born in the Duchy of Milan in the town of Somma Lombardo on February 11, 1535. His mother was a member of a prominent family but died during childbirth. The future pope was the son of Francesco who was a senator and later a cardinal priest. Those who knew him during his early years claimed that he always followed the teachings of the Church and encouraged others to do the same. Niccolò moved to two cities to study law and then became the Bishop of Cremona. He attended the Council of Trent and met Pope Gregory XIII who made him a cardinal priest in a new church. The pope would remain here for several years after the death of his best friend.

Pope Urban VII was pope for only 12 days when he suddenly died. King Phillip II of Spain sent an ambassador to the papal election with a list of seven men he deemed worthy of the position. The bishops selected Niccolò who did not want the position, but he agreed to become the pope after spending some time in prayer.

Outsiders at the time often gambled on the outcome of papal elections. Upon becoming the pope, Gregory XIV issued a papal bull that made this type of gambling illegal. It stated that anyone caught gambling on papal elections or the choosing of cardinals would face excommunication.

Pope Gregory XIV found himself frequently involved in the French Wars of Religion, which lasted for more than three decades. He sided with King Phillip who was in favor of the Catholic Church and agreed to excommunicate Henry IV of France on the king’s orders. This decision also allowed the pope to reiterate the words of Pope Sixtus V who claimed that Henry was a heretic. The pope would also gather an army of men to help the Spanish in their battles.

Though the Catholic Church regarded abortion as a mortal sin for many years, Gregory released a papal bull that claimed it was not a sin unless the fetus was animated or moving. Pope Sixtus V previously issued a bull that called abortion a sin, but the new papal bull would overrule the old one.

Gregory was in his mid-50s when he became the pope and suffered from a weakened system for many years. Much of his problems related to the gallstones he had. Near the end of October of 1591, he experienced such intense pain that he went to bed. He would die on October 16 of that year from complications caused by the gallstones.