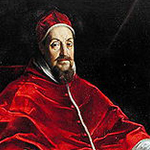 Pope Gregory XV was the leader of the Catholic Church from 1621 to 1623 and the 234th pope in history. Most know him for the bulls he issued, including one that allowed bishops to vote for popes by secret ballot. He also released an order that spoke out against witches and magicians. You can learn more about Pope Gregory XV and his papacy in this article.

The future Pope Gregory XV was the third child born to Camilla Bianchini and Pompeo Ludovisi. His family had money as his father was a count. Known as Alessandro during his early years, he saw the births of three more siblings. The future pope would study with the Society of Jesuits at the Roman College in Rome. Not long after he graduated, he became a papal jurist.

Alessandro spent some time traveling around Italy before settling down in Rome. It was here that he held different positions in the Church and where he would work as an auditor for the Roman Rota. Pope Paul V chose Alessandro as the new Archbishop of Rome, which required him to go through a consecration. While working for Pope Paul V, he traveled to the Duchy of Savoy and worked as a mediator to end a feud between King Phillip III of Spain and the Duke of Savoy. This also brought him to the attention of voting bishops, especially after he became the Cardinal-Priest of Santa Maria.

Following the death of Pope Paul V, Alessandro attended the conclave where bishops voted on the next pope. Though he was in his late 60s and poor health, he willingly accepted the position but announced that he would need help. After choosing the name Pope Gregory XV, he turned to his nephew Ludovico and made him a cardinal. The pope believed that his nephew had the energy that he would need to handle the daily operations of the Church. Gregory also quickly named his brother as the Captain General and put him in charge of the Church’s military forces.

Pope Gregory XV did little during his short papacy. He supported several other leaders in their actions against the Ottoman Empire and sent them money to support their battles. Gregory issued a papal bull in 1621 that required secret ballots in all future papal elections. He would also release a second document in which he spoke out against magicians and witches. The pope helped with the canonization of several saints, including Teresa of Avila and Francis Xavier. Towards the end of his papacy, Gregory XV oversaw the beatification of three people and put them on the road to sainthood.

The poor health that he suffered before his papacy continued during his later years. Pope Gregory XV suffered from kidney stones and other medical conditions that caused diarrhea and stomach cramps. After waking in the middle of the night on July 4, he developed a fever and additional symptoms that contributed to his death four days later.