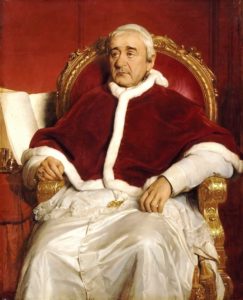 Pope Gregory XVI was the 16th pope to bear the name Gregory and 254 person to bear the responsibility of overseeing the Catholic Church. This article intends to highlight details of his life prior to becoming pope as well as mention some of the notable elements of his papacy.

Bartolomeo Cappellari was born to Italian nobility hailing from the village of Pesariis within Friuli. His father made a living as an attorney.

Cappellari joined the Catholic Church after turning 18 years of age. He became a member of the Benedictine order of the Camaldolese and studied the Bible within Murano’s Monastery of San Michele. Four years later, in 1787, he was ordained as a priest. While studying within the Camaldolese monastery, Bartolomeo quickly became notable for his exceptional grasp of language and theology. This reputation and aptitude was so great that he was called to teach philosophy and theology.

In 1790, as Bartolomeo became 25, he was elevated to the position of censor librorum for Camaldolese and the Holy Office of Venice. Five years later, he would go to Rome, even publishing a book, titled “II Trionfo della Santa Sede,” in 1799. 1800 saw him join the Pope Pius VII’s Academy of the Catholic Religion, where he would regularly put forth meditative texts regarding theology and philosophy. Bartolomeo received another advancement, to the position of abbot, in 1805. Abbot Cappellari was in charge of the Monastery of San Gregorio, atop Caelian Hill in Rome.

After Napoleon conquered Rome and saw to the arrest and deportation of Pope Pius VII, Cappellari rushed to Murano, to the same monastery he had first become a monk. Cappellari joined up with several other monks and relocated their college to Padua in 1814. Once Napoleon was sufficiently dealt with, and the Papal States regained sovereignty over central Italy, Cappellari was recalled to Rome as the Camaldolese vicar general. He would soon ascend to Counsellor to the Inquisition, then Consultor on February 29, 1820, then Prefect of the Congregation of Propaganda Fide on October 1, 1826. The last of these positions involved oversight of all missionary work beyond the reach of the Spanish Empire, including any missions within European, non-Catholic states. Although twice offered the position of bishop, he declined each time.

March 21st, 1825 marked Cappellari’s promotion to cardinal in pectore by Pope Leo XII. Not too long after this, he was called to negotiate an agreement that would safeguard Catholic rights in the Netherlands. His work was deemed successful, as was a subsequent peace treaty between the Ottomoan Empire and Armenian Catholics. He despised Polish revolutionaries as he believed they were trying to undermine Russia’s eager support of French Catholic royalists.

The Papacy of Gregory XVI.

Cappellari became Pope Gregory XVI after 51 days of debate, spanning 1829 to 1830. First, a Spain’s King Ferdinand VII vetoed the leading cardinal candidate. Then, a deadlock arose among Emmanuele De Gregorio and Bartolomeo Pacca that was only dislodged upon hearing that the northern Papal States were about to revolt. After reaching a two-thirds majority of 83 votes, Pope Gregory XVI became successor to Pope Pius VIII.

While Gregory XVI saw that the northern insurrections were rewarded with executions, hard labor and exile, these did little to stop unrest within the Papal States. In 1839, he spoke out against the Atlantic slave trade.