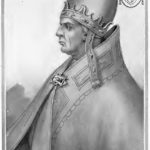 Pope Honorius II served as pontiff of the Catholic Church during the years of 1124 A.D. through 1130 A.D. He rose from a modest background, but thanks to his outstanding capabilities and clear intelligence he quickly rose through the ranks of the church hierarchy. Honorius II became associated with the powerful Roman Frangipani family, ensuring his election to the papacy in 1124.

The given name of Pope Honorius II at birth was Lamberto Scannabecchi. Though Lamberto grew up in the rural area of Fiagnano of the Casalfiumanese commune, he began a church career that quickly saw him appointed as the archdeacon of Bologna. It was not long before Lamberto’s clear abilities drew the attention of the then-Pope Urban II. Urban appointed Lamberto as a cardinal-priest in the year 1099 A.D.

Pope Paschal II succeeded Urban II as the pontiff and continued the patronage of the rising Lamberto. Paschal appointed him as Canon of the Lateran before later consecrating him as Ostia’s cardinal bishop in 1117 A.D. Under the subsequent pontificate of Pope Calixtus II, Lamberto served as the papal emissary to Germany.

During the Concordat of Worms that took place in 1122 A.D., Lamberto played a role in ending the tense and long-standing investiture controversy. This argument had begun in the 11th century and had centered on whose role it was to appoint clergy to their offices. Both the pope and the Holy Roman Emperor claimed the privilege.

When Pope Calixtus II died, the church conclave struggled over whether to anoint Lamberto or Cardinal Teobaldo Buccapeco as the new head of the Western Church. Lamberto prevailed and took the name of Pope Honorius II at his election. The struggle continued between his faction and the one that had supported his arch-rival Cardinal Teobaldo. Honorious then tendered the offer of his resignation, but the cardinals chose to confirm his election again on December 20, 1124 A.D.

Honorius II strove to accomplish reform in the church. His time in the papacy saw peace established between the Holy See and the rulers of Western Christendom. Among his achievements, Honorius II supported Count Lothar II of Supplinburg’s successful election to be the new German king in 1125 A.D. To keep friendly relations with the new King Lothar, Honorius excommunicated the rival claimant Conrad of Hohenstaufen.

Pope Honorius II also took on Southern Italian rival Count Roger II of Calabria and Sicily, who would later become the powerful King of Sicily. When Roger named himself duke of Apulia as well, the pope orchestrated a revolt in the form of a league of southern Italian barons and cities that rose against the now Duke Roger. Unfortunately for Honorius, Duke Roger’s military leadership and force proved to be more powerful in the contest that left the pope with no choice but to invest Roger II as Duke of Apulia in exchange for an oath of fealty (loyalty) to the pope.