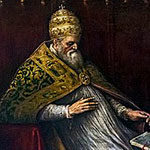 Pope Honorius III served as the head of the papacy in the years of 1216 A.D. through 1227 A.D. The Roman born pontiff has been considered among the finest administrators in the history of the Catholic Church. During his 11 years in the office, Honorius III tackled church reform, brought peace to various conflicts, and worked to organize a massive Fifth Crusade to the Holy Land.

Honorius was born in the city of Rome as Cencio Savelli. The son of Aimerico, Cencio enjoyed privilege as a scion of the Savelli family of the Eternal City. He grew up as a Roman aristocrat and received appointment as treasurer of the Holy See in the reigns of Popes Clement III and Celestine III (starting in 1188 A.D.). Pope Innocent III later appointed Savelli to the post of cardinal-priest. Savelli succeeded Innocent III as pontiff on July 18, 1216 A.D., choosing the name of Pope Honorius III.

The Papacy of Pope Honorius III

Honorius had worked tirelessly in crafting the policies and plans of his predecessor for reforms of the church and a crusade to retake the Holy Land from Islam. Upon his election to the papacy, he put the plans from the pontificate of Innocent into motion. The goal of launching a Fifth Crusade had already received approval from the 1215 A.D. Fourth Lateran Council.

King Frederick II of Sicily took a vow to lead the crusade that was intended to restore the almost entirely lost Kingdom of Jerusalem. Frederick would not leave on the crusade because of an involved dispute between the empire and the papacy over the emperor’s goal of bringing the whole of Italy under the imperial banner.

Honorius III became a victim of infighting among Roman families and had to flee the city for Viterbo, Italy in June of 1219 A.D. The Emperor Frederick intervened to restore the relationship between the rebels in Rome and Pope Honorius III. Even though he had intense concerns about doing so, Honorius crowned Frederick as Holy Roman Emperor on November 22, 1220 A.D. in Rome.

The pope also consented to the emperor being allowed to unite the Kingdom of Sicily with the Holy Roman Empire. With Frederick continuously putting off leaving on a crusade, Honorious threatened in 1225 A.D. to have the emperor excommunicated if he did not set out on the expedition to the Holy Land by August of 1227 A.D. Even with this threat hanging over his head, Frederick never left on his crusade until following the death of Pope Honorius III.

Despite his ongoing struggles with Frederick, Pope Honorius skillfully handled the difficult task of maintaining a fragile peace with bickering Catholic realms. He did manage to launch a Spanish crusade against the Moors in the year 1218 A.D.

Pope Honorius III established a tenuous peace between the feuding monarchs King Alfonso IX of Leon and King Ferdinand III of Castile. Honorius also brought a resolution to the English Baron’s War that began after King John died. His threats to excommunicate everyone who supported Prince Louis from France instead of the young son of John (King Henry III) proved effective in bringing peace to a major conflict. Honorius also managed to secure the release of imprisoned Danish King Valdemar II in 1225 A.D.