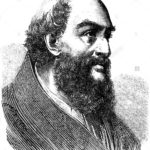 Pope Innocent II served as the pontiff and temporal ruler of the Papal States from his coronation on February 14, 1130 A.D. until he died in the year 1143 A.D. Because his election to the papacy proved to be controversial, the initial eight years of his pontificate suffered from the struggle to overcome his arch-rival Anacletus II the antipope. Critical to Innocent’s success was his securing of the support of King Lothair III the German ruler. Pope Innocent would later crown Lothair as the Holy Roman Emperor. The most enduring achievement of Pope Innocent II’s reign was his heading the Second Lateran Council.

Little is known about Innocent’s upbringing, although his parents were Roman. He served among the clergy who personally attended the Antipope Clement III, even fleeing into exile with the antipope at one point. By the year 1116 A.D., the pope had appointed Innocent to the position of cardinal. Pope Calixtus II sent Innocent off to represent the papacy at the conference that wrote the Concordat of Worms in 1122 A.D. Their agreement brought closure to the long-running argument between Holy Roman Emperor Henry V and the papacy over who had the right to install the clergy and bishops.

On the same night that his predecessor Honorius II died in 1130, Innocent was elected to be the pope Innocent II by a minority of the cardinals. Innocent’s chief rival Anacletus II had received the majority of the cardinals’ votes. This should have made Innocent II an antipope, but his subsequent success in achieving the recognition of nearly all of the Western church outside of Italy allowed the Catholic Church to decide that he was the legitimate pope.

It did not take long for Anacletus to ouster Innocent II from Rome. June of 1130 A.D. saw Innocent fleeing for France via a ship headed to Pisa. While Innocent was in France, the Abbot Bernard of Clairvaux persuaded the church in France as well as King Henry of England to back Innocent. Meanwhile the Archbishop Norbert of Magdeburg in Saxony convinced the German church as well as the King Lothair II of Germany to side with Innocent.

With Innocent’s meeting of King Lothair in March of 1131 A.D., he gained crucial German military support of his claim against Anacletus. The Germans invaded Italy and managed to seize all of Rome except for a small portion where Anacletus’ supporters withstood siege by August of 1132 A.D. A key moment of Innocent’s rule then occurred as he crowned King Lothair the Holy Roman Emperor.

Innocent suffered several later reversals in fortune over the following years. He had to flee to Pisa after Lothair departed from Italy. Although the German king returned in force to fight King Roger II of Sicily for supporting Anacletus, Lothair’s unanticipated death in 1137 A.D. cost Pope Innocent his biggest military supporter.

Pope Innocent II ended up excommunicating King Roger. Yet Roger’s forces ambushed and captured the pope later, forcing Innocent II to recognize Roger II as king of Sicily. Peace finally came when the pair of combatants at last acknowledged each others’ respective titles that year in 1139 A.D.

Pope Innocent II made several key decisions in the second part of his pontificate. He affirmed the customs and rule of the Knights Templar, ensuring their rise to power, fame, and riches. The pope subsequently put all of France under an interdict in which they were refused the church sacraments when the French King Louis VII would not agree to the pope’s nominee for the position of archbishop of Bourges.