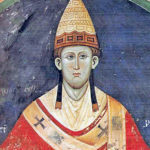 Pope Innocent III is regarded as the most important pope from the medieval period. Innocent rebuilt and increased the papal authority over the estate of the pope the Papal States, oversaw a reform of the Roman Curia, fought heresy in southern France and Italy, endeavored without ceasing to organize Crusades to re-take the lost Latin kingdom in the Holy Land, and created a new doctrine regarding the power of the pontificate over both the church and worldly affairs. In the year 1215 A.D., Innocent held the fourth Lateran Council and successfully reformed numerous lay and clerical practices of the church.

Pope Innocent III was born with the given (anglicized) name of Lothar to parents Count Trasimund of Segni and Claricia dei Scotti. Lothar’s education began in Rome likely in the Schola Cantorum. Following this education, he went to study in Paris the primary city for theological studies of the day. From Paris Lothar traveled to study in Bologna, Italy at the University of Bologna the leading center of learning for civil and canon law.

After completing his course of study in Paris, Lothar received the appointment of sub deacon from Pope Gregory VIII in the year 1187 A.D. Next Pope Clement III raised him to become a cardinal deacon in late 1189 A.D. or early 1190 A.D. Despite Lothar’s lack of experience in administration and his young age, the cardinals chose him to become the new pontiff the very day that his predecessor Pope Celestine III died on January 8, 1198 A.D. The church first made him a priest on February 21st of 1198 A.D. then anointed him the head of the Catholic Church the day after.

Immediately upon assuming the office of the papacy, Pope Innocent III took on major problems. The Western Emperor Henry VI had perished leaving behind two rivals for the throne (the brother of Henry, Philip of Swabia, and another claimant Otto of Brunswick). German princes were torn over the succession, the Christian principalities of the Holy Land had fallen to the Muslims, and southern Italy had collapsed into disarray. Besides these formidable challenges facing Innocent III, he dealt with growing heresy in the south of France. The pope’s authority in not only the Papal States but also Rome itself had collapsed, and reform had become essential for the papal curia. With tireless energy, Innocent III attacked each of these problems, many of them at the same time.

In the territory of Italy, Pope Innocent III massively expanded the Papal Estates’ control to well beyond the borders of all papal predecessors. From the time of his reign on the popes were key secular princes in all of central Italy. With the success of his fourth Lateran Council, Innocent III cemented his place in papal history as this remained the most crucial church council of the Middle Ages.

Pope Innocent III massively expanded the Crusading sphere during his pontificate. He sent crusades to Muslim held Spain and the Holy Land. The energetic pope also dispatched the Albigensian Crusade to fight the heresy of the Cathars in the south of France.

He bore responsibility for organizing the infamous Fourth Crusade (1202-1204 A.D.) that miscarried from its intended target of Jerusalem to instead attack and capture Constantinople, seat of the Eastern Christian Byzantine Empire. Innocent was enraged at the assault on Constantinople that countermanded his expressed orders, and he excommunicated all participating Crusaders.

In the end, Innocent III had no practical choice but to reluctantly accept the new reality on the ground of an occupied Eastern imperial capital. It has been called one of the great failures of his pontificate that he believed this devastating shattering of the Byzantine Empire would reunite the estranged Eastern and Western churches. The Byzantines recovered their shaken capital and empire approximately fifty years later, and hostility between the Greek and Catholic churches only grew bitterly worse as a result of the miscarried Fourth Crusade.