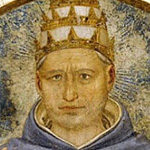 Pope Innocent V was born in 1224 A.D. in Savoy, France with the given name of Pierre De Tarentaise. As the first Dominican Order pope, he held the office of the papacy for only five months. Innocent worked closely with Thomas Aquinas and SS. Albertus Magnus in creating the Dominican Order’s rule of studies. During his brief pontificate he worked to establish peace between various kingdoms and realms of Christendom.

Innocent V had a major role in the 1274 A.D. Second Ecumenical Council in Lyons. At this church conclave he gave two discourses to the gathered clergymen and also delivered the funeral address for St. Bonaventure. Two years later the church cardinals elected Innocent to succeed Pope Gregory X at Arezzo on January 21st of 1276 A.D.

Pope Innocent V immediately began to pursue a peaceful pontificate upon election and for his brief five months in the office. During his short pontificate he worked to bring peace between Lucca and Pisa, to restore the Ghibellines and Guelphs’ relations in Italy, and to mediate conflicts between Charles of Anjou and Rudolph of the house of Hapsburg. Innocent also worked to bring consolidation and reunification of the Greek church in the east with that of Rome in the Council of Lyons.

Pope Innocent authored a number of writings on theology, philosophy, and canon law. While several of them were published in his day, a few of them remain officially unpublished. His primary work was the “Commentary on the Sentences of Peter Lombard.”

Pope Innocent V issued a few acts in his five months as head of the Catholic Church. He granted the privilege to keep the posts of Senator of Rome, Rector of Tuscia, and temporal head of the Roman city government to King Charles I of Sicily on March 2, 1276 A.D. Two days after this appointment, the pope wrote a letter in which he declared that King Charles had sworn fealty to him as King of Naples and Sicily.

In the remainder of his pontificate, Pope Innocent V continued the endeavors of his predecessor Pope Gregory to start another crusade and bring peace to numerous warring states and factions throughout Italy. His valiant efforts to reunite the estranged Eastern and Western churches ultimately failed.