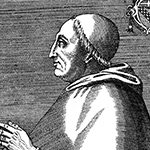 Pope Innocent VIII was the 213th man to hold the position. He led the Church for nearly eight years when war and fears of witchcraft ran rampant. It was a tumultuous time for the Italian peninsula, and the Pope’s politically motivated actions during that time only pushed the anarchy to its brink. The conflicts he created would not resolve until long after his death.

The Pope’s reign is not viewed favorably among historians. Considered unworthy and immoral by some, his actions resulted in a controversial reputation that continues even today. The Pope’s actions harmed the Church, leading to debt issues and questionable practices that would plague the Church and the Papal States for years to come.

Before becoming Pope Innocent VIII, he was born Giovanni Battista Cibo. Cibo was born in Genoa and was part of an old Genoese family. His father was an established senator in Rome. Thus, Cibo spent most of his youth at the Neapolitan Court.

Eventually, Cibo was appointed a Canon of the Cathedral of Capua. However, disputes with the Archbishop of Genoa caused him to resign. He then went to Padua and Rome for his education.

Giovanni Battista Cibo’s time with the Church took off in Rome. He became a priest, assisting Cardinal Calandrini. Nearly two decades later, he was officially made Bishop of Savona by Pope Paul II. However, that position only lasted for half a decade. In 1472, he exchanged his see for one in Molfetta, allowing him to move to southeast Italy.

The following year, he was made Cardinal by Pope Sixtus IV, whom he would eventually succeed. His appointment as Cardinal was heavily influenced by Giuliano Della Rovere, who would ultimately become Pope Julius II.

When Pope Sixtus IV died in 1484, the papal conclave was rife with issues. Gangs reportedly rioted in the streets as factions within the conclave started to scheme behind the scenes. The election had heavy political motivations. Promises of simony and benefices were said to influence votes.

Not long after Pope Innocent VIII rose to the papal throne, he called for a crusade against the Turks. However, one obstacle stood in the way of his summon to Christendom. He had to get past a conflict with King Ferdinand of Naples. The Pope would go on to excommunicate King Ferdinand and invite King Charles VIII of France to claim the Kingdom of Naples. This act of political defiance would throw Italy into anarchy for several decades. It created issues that would not end until long after the Pope’s death.

His attempt to crusade against the Turks ultimately ended in failure. However, that wasn’t his only controversial move.

The Pope’s politics were not viewed favorably among Italy’s states. In addition to the war with Naples, the Pope launched several conflicts that would deplete the papal treasury. In a futile attempt to resolve monetary issues, the Pope created and sold new posts. He was reportedly involved with bribery, which only ruined the Church’s reputation during his rule.

Another notable issue during his reign involved witchcraft. Pope Innocent VIII issued a Papal Bull to persecute those suspected of practicing witchcraft. He worked alongside the German inquisitor Heinrich Kramer, whom he granted explicit authority to prosecute suspects. This bull was heavily abused and used for political gain.